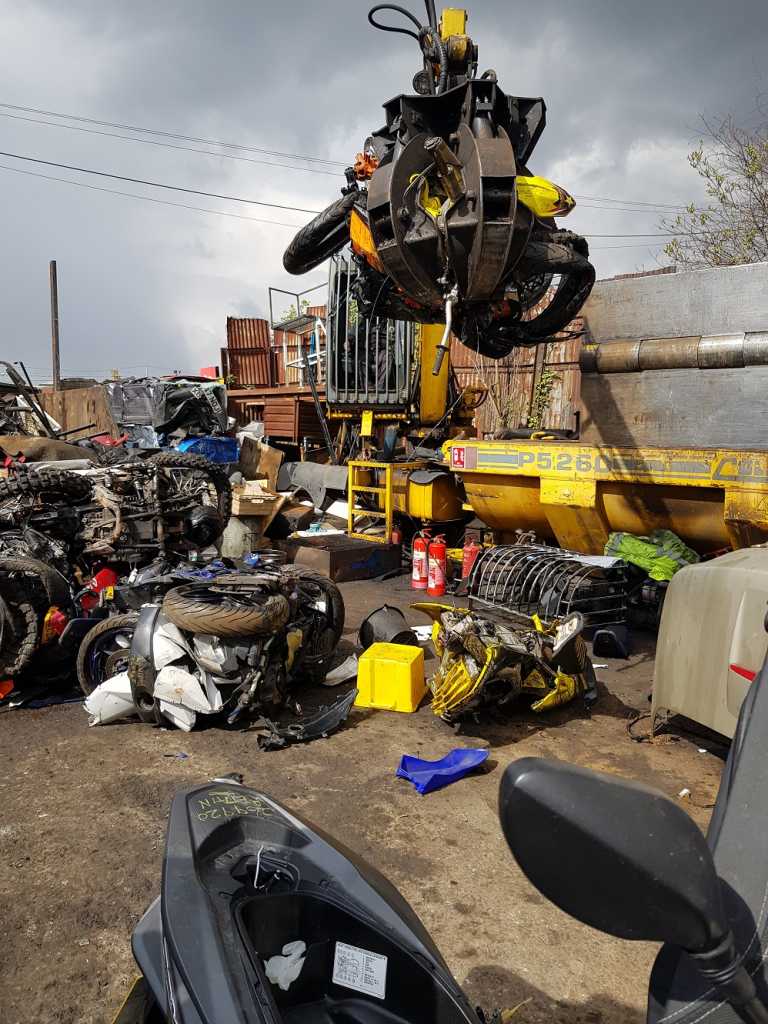 Bikes taken from a gang who ran amok on the roads during a lawless ‘Ride Out’ event have been crushed by West Midlands Police – as the force warns it will continue to seize and destroy ‘off-roaders’ ridden dangerously.

Last month West Midlands Police secured public nuisance convictions against 29 men who took to scramblers, quad-bikes and mopeds for an illegal bike rally through Solihull and Birmingham on 26 June 2016.

Most received suspended jail sentences – which means they face prison if they reoffend – but ringleader Andrew “Dru” Tomlinson and fellow biker Matthew Sidwell were put behind bars for 24 and 12 months respectively.

West Midlands Police seized more than 20 bikes during the investigation and yesterday (3 April) 10 of those were crushed at a vehicle compound in Birmingham.

Some had previously been destroyed while others were given to colleges where pupils are studying mechanical engineering.

Chief Inspector Jack Hadley was involved in the operation that led to the offenders’ arrest and conviction.

He said: “These bikes were ridden recklessly, endangering road users and pedestrians. Their owners have already been punished in court but it’s important to show that we will also look to secure destruction orders against their vehicles.

“Some of these off-roaders cost thousands of pounds so owners need to think long and hard before they take these out as only some quads and trial bikes, providing they are technically sound, are legal on public roads.

“However, if they are modified – don’t have wing mirrors, reg plates, the right braking system etc – that would render them illegal under the Road Traffic Act and so could only be used on private land, with the landowner’s permission, or on designated tracks.

“Scrambler bikes, mini moto’s and pit bikes can’t be registered with the DVLA or taxed or licenced so are banned from public roads.

“Offenders generally accept this which is why we see them riding around with their faces covered in a bid to avoid being identified.”

He added: “We are now much more experienced in going after these types of offenders. We will use tyre-deflating stinger devices to contain groups of illegal bikers that pose a danger to road users and to disable their motorbikes bikes.

“And some officers are now equipped with a DNA spray which they can use to ‘tag’ offenders and their bikes. This is an invisible liquid, each can with its own unique DNA, which shows up under UV light – so should we seize the offender’s bike or clothing in future we can link it to a specific incident and provides great evidence.

“The public have told us they are fed up of bikers who behave in this way and who risk causing serious road collisions – and we are determined to rid them from the streets of the West Midlands.”

People can report concerns about illegal off-road biking – or bikers causing a nuisance in public parks – by contacting their neighbourhood police team via the West Midlands Police website.