Mum sentenced for killing baby to ‘stop her crying’ 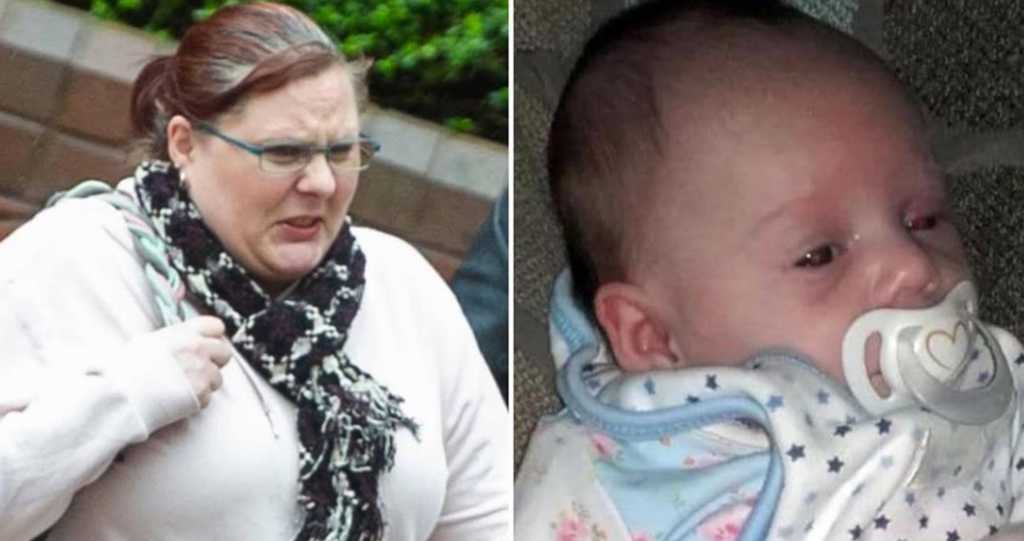 Abigail Palmer, from Solihull, has today been sentenced for crushing her two month old daughter to death.

Mrs Justice Lambert has jailed Palmer for 13 and a half years.

She passed a concurrent sentence of two years on the wounding charge.

33-year-old Palmer wiped her eyes with a tissue before being led away.

Abigail Palmer crushed Teri-Rae so hard she broke her ribs, possibly to stop her crying.

A jury at Birmingham Crown Court found the Solihull mum guilty of manslaughter and wounding.

Jonas Hankin QC, prosecuting, said Teri-Rae was born on October 24, 2016, and was made the subject of a child protection plan, as Palmer had a history of drug and alcohol abuse.

The court heard Palmer had dialled 999 on January 2, 2017, and when paramedics arrived at her Solihull home they were unable to resuscitate the baby.

A later medical examination revealed Teri-Rae had suffered both healing and fresh rib fractures and had received an inadequate supply of oxygen to her brain.

Mrs Justice Lambert told Palmer: “You crushed her rib cage in your hands. What you did was appalling .You did so because she was crying.

“You were on a short fuse because of lack of sleep. You lost control and tried to silence her.

“You settled down to have your nap with Teri-Rae lying on your chest.”

The judge added: “Within two days of her birth you were the subject of a child protection plan.

“You were caught on CCTV footage drinking wine secretly in the pub. There is reference in your Facebook message of you drinking two pints.

“I also have no doubt you continued to take cocaine during Teri-Rae’s life.

“You took Teri-Rae to the pub with you in stead of staying at home.”

The judge added: “The force you applied when squeezing Teri-Rae’s chest was massive. The risk of serious injury was and would have been obvious.

“The starting point of sentencing is 12 years.

“Your assault was a gross breach of trust an assault on a 10-week-old defenceless baby.

“Teri Rae would have suffered considerable pain and distress. The force you applied when squeezing Teri Rae’s chest was massive.”

On passing sentence, the judge said: “The fact that the assault was a breach of trust is an aggravating factor.

“Your acts were not in any way premeditated. Your selfish act led to the death of your daughter.

“This is something you will have to live with.”

The NSPCC has issued a statement.

It said: “Palmer had a duty to protect Teri-Rae from harm, but she abandoned this duty by inflicting appalling injuries on her defenceless child.

“Regardless of why she inflicted those injuries, she will now have to live with the tragic consequences of her actions.

“We would urge anyone concerned about a child’s welfare to contact the NSPCC Helpline on 0808 800 5000, where they can speak to trained counsellors in confidence, 24/7. It could save a child from serious harm.”

A mum has been convicted of squeezing her baby to death following a West Midlands Police investigation that saw detectives use futuristic 3D-scan technology to identify microscopic fractures to the tragic tot’s ribcage.

Abigail Palmer, from Redfern Close in Solihull, crushed two-month old Teri-Rae – causing a total of 10 rib fractures – in what police suspect was a violent response to her daughter’s cries for attention.

Initially the baby’s death wasn’t believed to be suspicious: there were no signs of injury and Palmer claimed she awoke on the settee alongside Teri-Rae on the afternoon of 2 January 2017 to find her “blue and lifeless”.

However, an investigation was launched days later when a skeletal survey revealed three healing rib fractures – and a later forensic post mortem confirmed the baby didn’t die suddenly but over a period of up to three hours when her brain was starved of oxygen.

West Midlands Police turned to micro-CT scanning experts at the University of Warwick in a bid to get a more detailed picture of the child’s injuries.

Medical experts concluded the injuries would have shallowed Teri-Rae’s breathing due to the pain and slowly she would have suffocated.

West Midlands Police charged Palmer with manslaughter – and at Birmingham Crown Court today (4 April) she was jailed for 13-and-a-half years having been found guilty by a jury.

West Midlands Police Sergeant Mick Byron from the Child Abuse Investigation Team, said: “We were able to show that Teri-Rae suffered 10 rib fractures over a four to 12 hour period between 3am and 11am on 2 January.

“Palmer had been at a pub for six hours on New Year’s Day but claimed to have drank mainly squash, not alcohol, as that would have breached a condition of the Child Protection Plan she was bound by.

“We don’t believe her… and neither did the jury. We suspect she came home drunk, was awoken by her baby in the night and inflicted these terrible images in response to Teri-Rae’s crying.

“Palmer admitted the baby was never out of her sight and never mishandled by anyone else; she offered no plausible accidental explanation for her daughter’s injuries. There was no indication Teri-Rai suffered a bone fragility condition and she was not independently mobile enough to have injured herself.

“Significant force is required to cause rib fractures in a baby… the presence of rib fractures in a baby of this age is indicative of abusive, deliberately inflicted, injury. This was a truly heart-breaking case to investigate, that a little baby’s life was taken by the one person who should have been protecting her.”

West Midlands Police has developed a pioneering partnership with the University of Warwick and its cutting-edge WMG research centre to create the micro-CT imaging process.

Such technology has been used for some time in industries like aerospace and automotive – where atomic material failures can have catastrophic consequences – but West Midlands Police was the first UK force to embrace the science to support investigations.

Professor Mark Williams from WMG at the University of Warwick added: “State-of-the-art 3D scanning technology allowed us to identify multiple fractures to Teri-Rae’s ribs that had occurred over an extended period of time.

“The ability to produce highly detailed 3D images of these shocking injuries helped establish the truth and show what had happened. It’s an honour for us to provide critical evidence to this case, and to be able to help the police investigate such an appalling tragedy.”