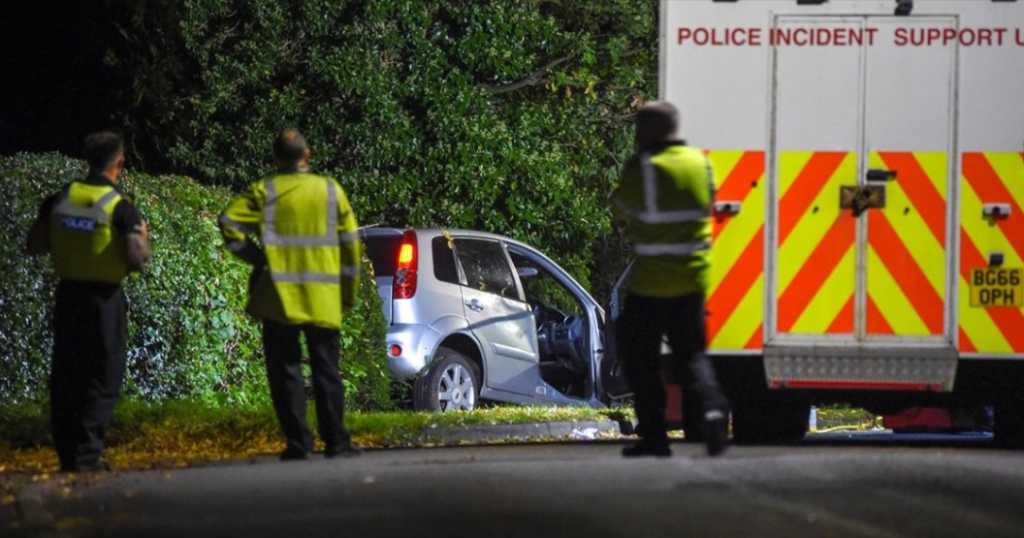 Police have launched an investigation after a pedestrian was left seriously injured when struck by a car in Solihull.

The man, aged 42, was hit on Jacobean Lane, Knowle at around 9pm on Sunday night (22 September).

Two ambulances rushed to the scene and found the crash victim with multiple serious injuries. He was taken to the Queen Elizabeth Hospital for further treatment.

West Midlands Police later arrested a man for attempted murder but released him pending further inquires to establish whether the victim was knocked down deliberately.

Dramatic images from the scene capture a silver Ford crashed in a grass verge within a police cordon and surrounded by officers.

Collision investigators for West Midlands Police can be seen collecting evidence from the scene in the pictures.

A WestMidlands Ambulance Service spokesman said: “We were called to reports of a collision between a car and a pedestrian on Jacobean Lane, Solihull at 9pm last night.

“Two ambulances and a paramedic officer attended the scene.

“On arrival we discovered one patient, a man, who was the pedestrian.

“He received treatment for multiple serious injuries before being taken to Queen Elizabeth Hospital, Birmingham for further treatment.”

A statement from West Midlands Police read: “Police are investigating after a man suffered multiple fractures when struck by a car in Jacobean Lane, Solihull just before 9pm last night (Sunday 22 September).

“A 26-year-old man was arrested at the scene on suspicion of attempted murder; he has been released pending further enquiries to determine whether the victim was deliberately driven at.

“The 42-year-old victim remains in hospital with serious injuries to his arms and legs.

“Enquiries continue and anyone who saw what happened or with information is asked to contact us via Live Chat at west-midlands.police.uk between 8am and midnight or call 101 anytime, quoting log 2418 of 22 September.