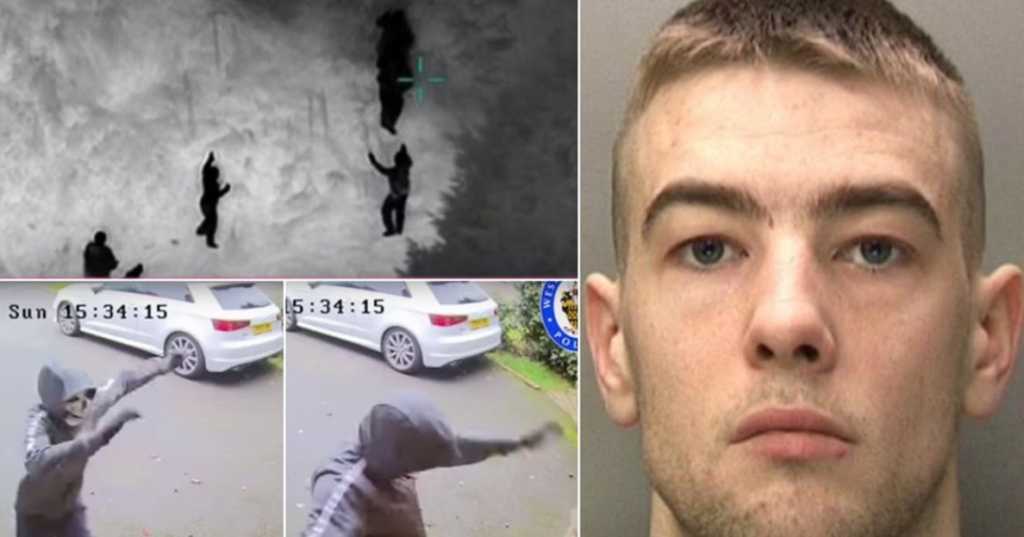 He was the gang leader police likened to ‘Fagin’ as he recruited youngsters to rob homes and strike fear into residents across #Solihull and Birmingham.

Ringleader Daniel Toms and his raiders stole tens of thousands of pounds-worth of jewellery, electrical and other valuables during a violent crime-spree.

The 26-year-old would choose younger recruits – who were not well-known with West Midlands Police – to act as accomplices in the terrifying break-ins, it was revealed in a BBC documentary.

It is believed the burglars were linked to 40 home invasions as they targeted properties with high-value cars parked on the driveways.

One victim, a 12-year-old schoolgirl, was left cowering under her desk as two members of the gang desperately tried to kick their way into her Knowle home in a burglary bid.

But the thugs, including Adil Iqbal, aged 20, were caught in CCTV footage which would later see the whole gang locked up for a total of over 12 years.

Their eventual capture, including dramatic police chases, featured in Episode 17 of the documentary, Caught Red Handed.

Speaking on the show, Investigating officer Detective Constable Alan Reeves, said: “Daniel Toms was the key person in all of this, he was the Fagin if you like, getting people to commit offences with him.”

Detectives were already hunting a highly active gang of burglars when Lucy, a schoolgirl from Knowle, had her home targeted for the Audi on the drive in 1 October.

The child was busy completing homework while her parents walked the family dog nearby when Iqbal, unmasked, was spotted knocking her door on their crystal-clear CCTV.

When he received no answer from the girl, who was advised by parents not to open the door to strangers, he then vanished back to the car.

She watched him with relief, but this was all part of their plan – the way they committed their crimes.

Hooded Caleb Ilsley, 18, then approaches the house and begins looking in windows – as shown in the above CCTV.

Then both are seen returning, with Iqbal now wearing a fearsome skeleton mask, to try to kick down the door and storm the home.

Preparing for the worst, shaken Lucy barricaded herself into her bedroom with a chair and cowered underneath her desk.

Luckily, the pair walked away empty-handed on that occasion, but members of the gang went onto target houses in Chatsworth Drive, Dorridge, and Astor Drive in Moseley, on 19 October.

The gang smashed their way inside a house in Baldwins Lane, Hall Green, where they took valuables and two sets of car keys.

Four days later they were joined by 18-year-old Taylor Burns.

They failed to get into homes in Streetsbrook Road, Solihull, and #NortonLane in nearby #TidburyGreen but used a screwdriver to break into a house in St Agnes Road, Moseley.

Officers were already aware of Toms after his DNA was found on a cigarette butt left at the scene of a Staffordshire burglary.

But the above high-quality CCTV footage from their attempted burglary at Lucy’s home in Knowle helped police identify the other men after it was shared on social media.

Their faces and details were shared with stations across the city, leading to a short police chase of their Ford Fiesta getaway car.

They got away, but were forced to abandon their vehicle in Acocks Green.

Forensic evidence linking the gang to several burglaries was then found inside the car, with police recovering a stolen property haul, a screwdriver and other crucial evidence.

Iqbal tried to escape when officers arrived at his home in Douglas Road, Acocks Green, on 22 November but was arrested.

Toms was detained hiding near a lake in Coventry on 21 December. Toms and Iqbal admitted seven burglaries and dangerous driving at Birmingham Crown Court on 8 May.

“We have proved this group were behind up to 10 burglaries but it’s suspected they were involved in many more, possibly in excess of 40.”

Toms was jailed for five-and-a-half years while Iqbal was locked up for three years two months.

Burns, from Richmond Road in Stechford, admitted three burglaries and was locked up for 20 months.

A fourth man – Caleb Ilsley, 18, of Denham Road, Acocks Green – admitted joining Iqbal during the attempted Knowle break-in on 1 October and a burglary in Faulkner Road, Solihull, on 13 March.

He was locked up for two years.