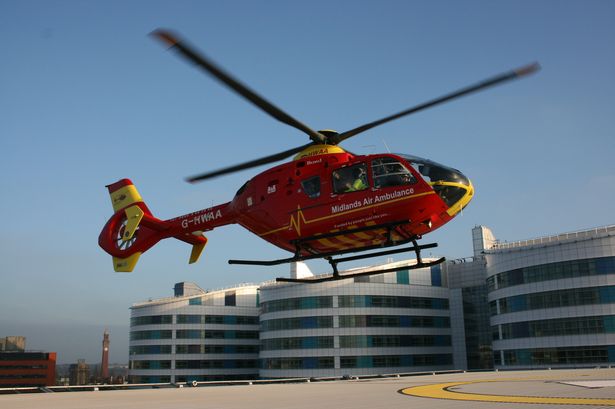 A driver was left seriously injured after his van overturned in a crash on a key Solihull route.

The motorist was badly hurt when his van hit a barrier and overturned on CoventryRoad, Bickenhill on Monday morning (11 November).

Police shut the road near to Stonebridge Island just before 7am, sparking traffic chaos for commuters on the nearby M6 and A452.

A driver claimed to have been stuck in standing traffic for an hour while another said it took 40 minutes to travel two miles on the A446.

An air ambulance, land ambulance and critical care car raced to the scene to treat the crash victim.

He suffered a serious head injury and was given trauma care before being rushed to hospital on blue lights.

No other vehicles were involved in the collision.

A West Midlands Ambulance Service spokeswoman said: “We were called at 6.43am to the A45 Stonebridge Island, Bickenhill to a single car RTC.

“An ambulance, paramedic officer and the Critical Care Car from the Air Ambulance Service responded.

“One man suffered serious injuries and was given trauma care on scene before being taken on blue lights to University Hospital Coventry and Warwickshire for further emergency care.”

The road remained closed at 9am while police made the scene safe.

West Midlands Police has urged anyone with information or who witnessed the incident to come forward.

“Police are currently on Coventry Road just off Stonebridge Island in Solihull, after a van hit a barrier and flipped over just before 7am this morning (Monday 11 November).

“A man has been taken to hospital with a serious head injury and the road has been closed while the scene is made safe.

“Enquiries continue and anyone with information is asked to contact us via Live Chat at www.west-midlands.police.uk between 8am and midnight, or call 101 anytime.