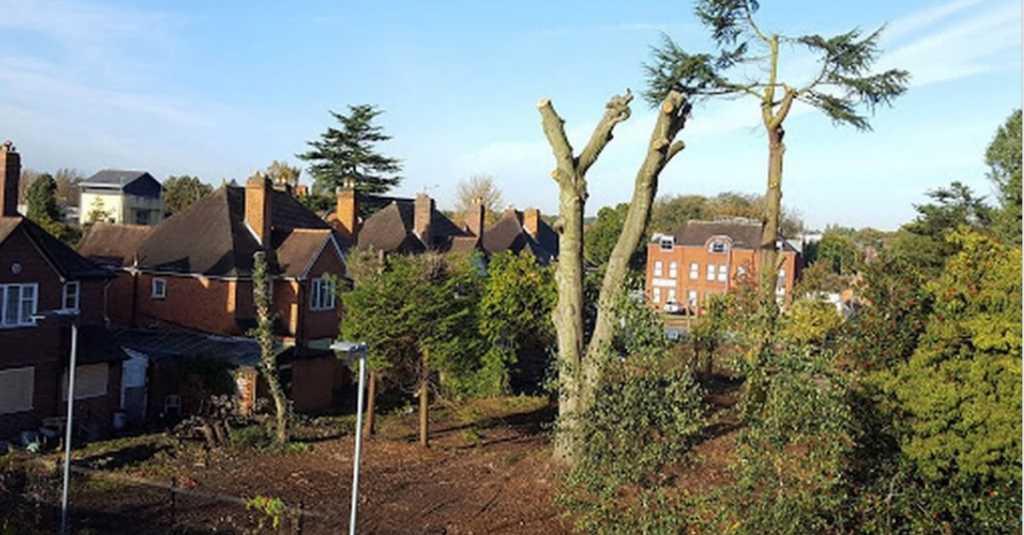 A Solihull environmental campaigner has called for more trees to be planted across the borough after seeing the huge impact of the town centre’s new Homer Road development.

Homes and trees in the area have been pulled down to make way for a new seven storey office block.

The latest pictures show the loss of green space inside the town’s ring road.

Having campaigned in March to stop developers putting nets over trees during the nesting season in Sears Retail Park, Cllr Hodgson said: “I am concerned to see so much greenery, including mature trees and vegetation, being cleared to make way for this new office block at this gateway location.

“We are keen to see the investment and jobs that schemes like this will bring, as part of the long-term masterplan for Solihull town centre, but we need to be very careful not to lose the attractiveness of Solihull in the process.

“Trees not only provide cleaner air, but also are great for wellbeing.

“My challenge to the planners is to ensure as many mature trees are retained, and that there is substantial mitigation against any that are lost.

“With the nesting campaign, we had no power except for the power of persuasion and the developers ultimately saw the light – our campaign had a really good impact and helped to focus a few minds.

“Trees are not just about health benefits but we have to offset the carbon, too.

“Solihull wants to increase the number of people living in the centre and (future residents in the centre) they need a decent environment.”

Trees are being chopped down and former houses demolished at the point where Station Road meets Homer Road.

The early work has also removed the last large green oasis from within the boundary of Solihull’s inner ‘ring road’ system.

The move follows the loss of mature trees at the back of the demolished former magistrates’ court where a new Aldi is set to open on Thursday 28 November.

Younger trees have been planted along a footpath between Aldi and Touchwood but are more ornamental than the area’s major oaks and similar species.

The only other place with a significant collection of trees within the Solihull ‘ring road’ is now Mell Square.

When the Homer Road Gateway plan was displayed in Solihull Library it said: “(The development) will form a vital part of the council’s town centre masterplan, which provides a clear blueprint for future investment and development in the town centre over the next 20 years.

“The site is a prominent location in the town centre business quarter, linking Solihull Railway Station to the shopping core.”

At the back of the new Aldi, there is now a delivery area for trucks to bring goods in to the store whereas aerial pictures from Google Maps shows how it used to be leafy there, too.

A mature oak tree between the front right hand corner of the new Aldi and the police station on Homer Road has also been earmarked for felling.

Here, the plan is to plant ‘a replacement tree of different species within the soft landscaping at the front of the police station’.

But the biggest change to Solihull’s traditional ‘leafy environment’ is happening at the junction of Station Road and Station Road.

A new, seven-storey office block has been promised at the corner where several houses had been used as offices in recent years.

The land has mostly been cleared of anything green and six former family-sized detached houses are now in the process of being demolished, too.

They would have once had an enviable location for families but as the town has expanded, they have most recently been used as offices. Now some have been demolished and the rest are doomed.

The new office block is set to create 10,000 sq m of Grade A office space with room for companies of different sizes.

On the Station Road side, there are set to be seven storeys plus a roof level, with six storeys on the Homer Rode side.

The development is earmarked to have 60 car parking spaces at ground level, helping to facilitate meetings for other local businesses.

Demolition work on the site also known as ‘Westgate, 21 Homer Road’ is continuing throughout this autumn and into winter.

Construction work is set to begin at anytime from mid 2020 onwards.

The first companies would then be able to move in by 2022.

In terms of the Homer Road Gateway building itself, Solihull Metropolitan Borough Council said the development would be ‘in keeping’ with other tall buildings in the area.

A document published online in March described the site as a ‘key strategic and commercial location (which) offers huge potential for investment and development.

‘Plans are currently being shaped, in response to occupier demand and investor confidence in the area, for a landmark office scheme with the potential to deliver over 10,000sq m of new Grade A office space in this key location close to Touchwood shopping centre and Solihull railway station.

‘The scheme will form a vital part of the council’s new town centre masterplan which provides a clear blueprint for future investment and development in the town centre over the next 20 years.’