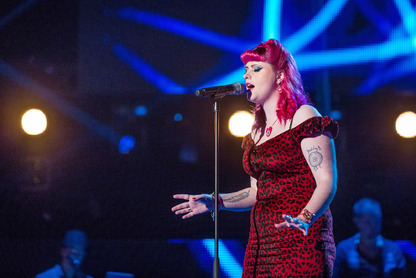 Melissa Gill, 21, who works at the Co-op in Earlswood, serenaded the audience and panel at the weekend with her rendition of Amy Winehouse’s Love is a Losing Game. Three red chairs turned around – Kylie Minogue, Tom Jones and Ricky Wilson battled it out to become her mentor on the show.

The Coventry University music student said she chose team Tom because he has first-hand experience in the era of music she is interested in. She added: “Singing in-front of the coaches was really nerve-racking but Sir Tom is a really nice guy and I can’t believe I’ve had the chance to work with him so closely. Music is my passion and making it on to a show like The Voice is a fantastic opportunity for me.”

After the show aired Sir Tom took to Twitter and welcomed Melissa onto his team. He said: “Another night, another girl on my team! Welcome to Team Tom.”

Melissa also performs with her friend Hannah Maydwell as a duet under the name That Sixties Vibe. After Saturday’s show aired Melissa was inundated with messages of congratulations and well wishes from friends, family and fans.

Sister Kayleigh Gill tweeted: “Well done to my beautiful sister. You did me proud.”

Meanwhile her work boss John Dyer added: “We were all watching on Saturday night and look forward to seeing how she progresses on team Tom. Melissa is a great member of team and we’re really proud of her success on The Voice.”

The Voice isn’t Melissa’s first brush with success, last year she joined the bill at the Moseley Folk Festival and in 2010 she won the Stratford-Upon-Avon Soundclash.