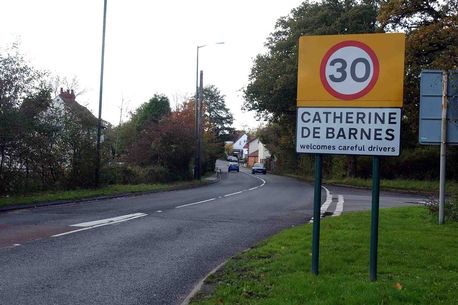 Plans for a controversial 4,000 plot Muslim cemetery in a Solihull village have been thrown out.

The decision was immediately branded “Islamaphobic” by some members of the local Muslim community.

The graveyard scheme in Catherine-de-Barnes, was rejected by planners with concerns it was inappropriate development within the greenbelt and fears it would contaminate local water sources and increase traffic.

But a separate application for a 7,000 plot Muslim cemetery adjacent to this site still has to be determined.

Some local Muslims hit out at the rejection of the 4,000 cemetery scheme calling it “prejudiced”.

Justin Smith, representing the applicants, Cemetery Development Services, told Solihull Council’s planning committee there was a significant demand from the Muslim community within five to ten miles of Solihull.

The plan received 2,125 letters of support, plus a near-400 name petition.

“It demonstrates need on a regional basis if not local basis,” he said.

He also warned that they would have “no alternative” but to appeal if refused.

Solihull Ratepayers Secretary Trevor Eames told the meeting there was already adequate burial provision for local Muslims and claimed most of the plan’s support came from Birmingham or even further away.

Councillor Jim Ryan said: “I’m very respectful of the Muslim community. But whatever minority group, whatever religious persuasion, wants to put forward an application for the Meriden Gap, I would oppose.

“My faith is Catholic – but if the Catholic church proposed this I would object.

“The green belt between Solihull and the Meriden Gap must be protected.”

Councillors voted unanimously to refuse planning permission for the 4,000 plot cemetery but the decision has outraged the local Muslim community.

Speaking after the decision a local headteacher and follower of Islam, who did not want to be named, said she was furious.

“There was no sense of justice, of integration, no equality for the community.

“It’s a classic case of discrimination.

“I’ve been in Solihull for more than two decades but this was not like the Solihull I know and love.

“We could have worked together, to compromise or reduce the number of plots but it was just a no. It’s a real smack in the face.

“I hope it goes to appeal.”

The controversial application by Cemetery Development Services was originally submitted early this year but withdrawn amid a storm of protest.

However, in July the plans were re-submitted and a second application for an adjacent Muslim-only cemetery for a further 7,000 plots was received by the authority in September.

A Muslim mum-of-three, from Solihull, also criticised the Council’s decision.

“It’s Islamaphobia. It makes you feel like you want to cry,” she said.

“We have to travel 45 minutes to see my mum where she is buried. She lived in Streetsbrook Road but we had to bury her in Handsworth.

“We want to be able to be buried near our families, where we have lived our lives.”