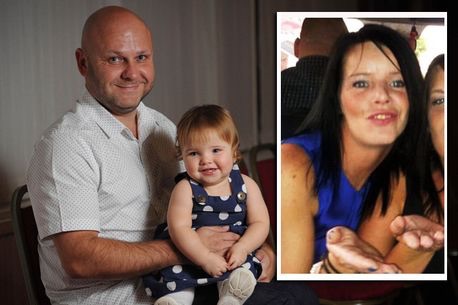 She’s the little girl born out of tragedy after her mum died just a day after she was delivered prematurely, following a freak accident.

Seven-months pregnant Debbie Gallagher was rushed to hospital after partner Mike Faultless discovered her lying unconscious at the bottom of the stairs at their Chelmsley Wood home.

She had suffered a devastating head injury in the fall, possibly caused by striking the bannister.

As doctors battled to save her life, an emergency Caesarean section was carried out to deliver Daisy – born two months early weighing 4lb 15oz.

Tragically, her mum died from her injuries the following day, aged just 36.

Heartbroken Land Rover engineer Mike, 40, was left to bring up his baby daughter and two step-children after the loss of his sweetheart on 24th July last year.

He said: “Daisy is such a beautiful little girl and I am so proud of her. I know Debbie would have been so proud too.

“It was such a terrible time. There was the elation of seeing your little girl come into the world and then, just a day later, seeing the woman you love pass away.”

Mike described the moment he discovered Debbie lying at the foot of the stairs at their home in Buckden Close.

He said: “We had gone to bed saying how happy we were. Then there was a load bang from downstairs that woke me up.

“I shouted down for Debbie but I got no answer. I got up to find her and saw a figure lying at the bottom of the stairs. I raced down to her and found blood coming from behind her ear. I was in total panic and shock.”

Friends and family of Debbie have since raised almost £4,000 in her memory for the Intensive Care Unit (ICU) at University Hospital, Coventry, where she was treated before her death.

A number of events have been organised by her dad James Gallagher, his partner Lynn, and sister-in-law Rachael Faultless-Hodgson, including a sponsored walk and a 60’s night.

Mike added: “Debbie was a fun-loving woman who was happiest when having a party and dancing with family and friends. She was such a wonderful partner and mother and we planned to spend the rest of our lives together.”

The money donated to the hospital will be used to fund new equipment and facilities to enhance the care of ICU patients.