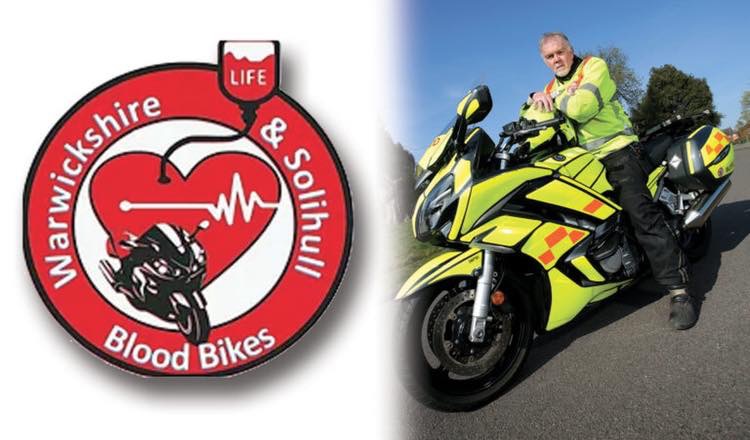 A motorbike charity that has provided a free out-of-hours blood supply service to the NHS in Coventry and Warwickshire, has been replaced with a new £14million contract which takes on its work – and a range of other transport services.

Warwickshire and Solihull Blood Bikes [WSBB] claim they were excluded from the tendering process, which started in June 2016, and was run by The Coventry and Warwickshire Pathology Service (CWPS) – and their arrangement ended yesterday, Monday 1 April.

Mark Lavery, chairman of WSBB said: “We are shell shocked and gutted. We found out by accident three weeks ago when someone spotted a delivery vehicle at University Hospital fo Coventry and Warwickshire.

“At no stage have we been involved in the tendering process. It was through making our own enquiries we found out that UHCW has chosen to pay a company for work we have previously done free-of-charge.

“We are devastated the NHS could make such an award without consulting us. We have completed over 7,000 calls in all weather conditions since we were founded in 2012 and it is estimated we have saved UHCW nearly £700,000 in that time.

“All our unpaid volunteers are shocked at the decision. We have committed significant time and effort to grow the group where public donations have enabled us to invest in five vehicles to maintain service in all weathers 365 days a year.”

Despite the blow, Mr Lavery has vowed to continue the other work WSBB does with Air Ambulance and the delivery of donor milk for premature babies.

He said: “We believe an investigation is warranted to determine how and why an experienced and reputable charity can be sacrificed in a cash-strapped NHS.

“It is totally beyond comprehension how tax payers’ funds can be used to increase the profits of a company when there is a proven free-of-charge service already in place.”

“It runs a transport and logistics service to safely transfer blood samples and other medical items between hospitals and other sites. Demand has grown massively and approximately ten million samples were handled in 2018/19.

“The transport service was previously delivered by a wide range of suppliers, with some contracted through CWPS and others through third party organisations.

“With complexities increasing and the service potentially expanding to cover areas such as Hereford and Worcester, a decision was made to standardise delivery to ensure current and future needs, as well as stringent UK accreditation requirements, are met and exceeded.

“In line with public sector procurement regulations, we went out to open tender and supplier days were held to inform organisations of our requirements.

“This process has now concluded and the contract awarded to QE Facilities, a wholly owned subsidiary company of Gateshead Health NHS Foundation Trust.

“Any profit generated is reinvested in health care, not transferred to independent shareholders. Our aim now is to ensure the service continues to go from strength to strength and helps to further enhance the patient experience.”

The spokesman added: “All previous suppliers – including volunteers from the Warwickshire and Solihull Blood Bikes – have been informed of the changes and thanked for their invaluable contribution.

“We offered to continue utilising Warwickshire and Solihull Blood Bikes until at least June 2019 while we supported them in exploring new opportunities. Since then, representatives have informed us by email of their decision to withdraw the service from 1st April.

“It should be noted Warwickshire and Solihull Blood Bikes transported approximately 1,000 samples a year – 0.01% of the total received by CWPS. We are immensely grateful to the group for its hard work and support.”