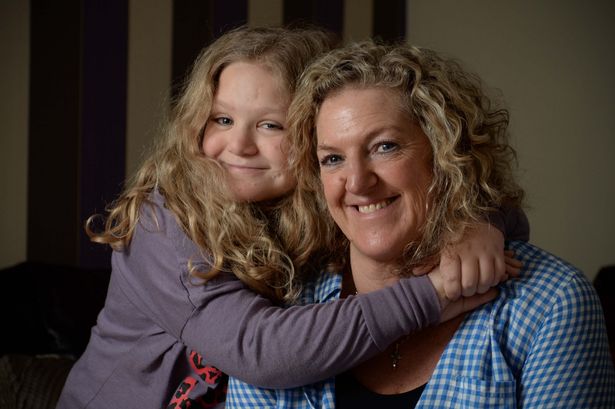 At just five years old Iona Atkins was diagnosed with a brain tumour. Now the brave 12 year old is starring in school musicals.

“Looking back, Iona was displaying classic signs of a brain tumour,” recalls her mum Ann Atkins. “The problem was, as we knew she had a problem with her ear, we put it down to that.”

Iona had already been diagnosed with Turner syndrome as a baby. Along with other common symptoms such as infertility and short height, people that suffer with Turner syndrome can often have ear complications. She was suffering with a cholesteatoma – rare growth in her right ear – and was due to have an operation at Birmingham Children’s Hospital in February 2007.

“She had been vomiting and a bit off balance – but we put that down to her ear,” says Ann, 50, from Shirley. She had headaches and was being clumsy. We never considered it could be something more.”

In preparation for her ear surgery, Iona was given a CT scan. But immediately after she was sent for an MRI scan, which revealed a shadow on the brain.

Anna and husband Stuart, aged 46, were told the devastating news that their daughter had a brain tumour. She is one of only three people in the world to have had both Turner’s syndrome and a brain tumour.

“It was completely out of the blue,” says Ann. “It was so urgent that we were told surgeons wanted to operate within a few days.”

Iona was diagnosed with a craniopharyngioma brain tumour. The tumour was impacting on various areas of her brain including the optic nerve, the pituitary gland, the hypothalamus and the brain stem. Just days after it was discovered, Iona underwent a 10-hour operation to try and remove it.

“In a way you just have to steamroll ahead,” says Ann, a retired police sergeant. “I had to stay strong for Iona and for my other daughter Alex, who is 17.”

The operation proved quite tricky as the tumour was in the middle of Iona’s brain and it caused some damage to her pituitary gland. Although surgeons were able to remove the majority of the tumour, some cells were left behind as it was too dangerous for them to be taken out.

Sadly, after a year the tumour had returned and brave Iona then underwent intensive radiotherapy for six weeks.

“We never thought it would come back so quickly, though we knew it was a possibility. She had to be put under general anaesthetic every day for 35 treatments,” recalls Ann. “She was totally exhausted and large areas of her long curly blonde hair fell out. She looked a bit like a monk. But she would never complain and she would always be telling the nurses jokes and singing for them. She was a joy.”

The radiotherapy managed to shrink the tumour but Iona may need treatment again in the future. Now, six years on, she has check-ups at Birmingham Children’s Hospital every six months to monitor the tumour.

“She is pretty well in herself,” says Ann. “She has suffered some damage due to the treatment. Her short-term memory has been affected and her organisation and planning has suffered. But Iona is amazing. Her zest for life is incredible. She is very determined and has made fantastic progress.”

Now Iona, who is a pupil at Langley Academy in Solihull, is a star in the making as she rehearses for three local musical productions – Oliver, We Will Rock You and Matilda.

“She is very driven and when she is older she wants to be a children’s nurse – which isn’t a surprise after all she’s been through.”

Since Iona’s illness, Ann has become determined to raise money and awareness for The Brain Tumour Charity based in Solihull. Over the last few years she has raised £26,000 for the charity, through a whole variety of sponsored events, including running the London Marathon, coffee mornings and even a Wacky Wigs Walk. Ann also took on a gruelling challenge to complete a marathon on a rowing machine on her 50th birthday. She set up her rowing machine at Iona’s school on 25th February and rowed 26 miles, with students rowing alongside her for extra encouragement.

“Iona did the first 10 minutes and the last 10 minutes with me. The kids were great and kept me really motivated.”

Ann’s trainer, Ali Seal, encouraged her to keep the rowing up and she is now ranked number one in the world for her age group in the marathon category. Not only that, she won a silver and bronze medal in the National Indoor Rowing Championships in Manchester on 2nd March.

“It really is mad,” she explains. “It all started as I wanted to raise as much money as I could because of Iona, and it has all just snowballed.

“It is such an important cause.”

To donate to Ann’s fund-raising for The Brain Tumour Charity go to www.justgiving.com/Ann-Atkins-Rows-for-it.

A pressure headache is usually dull and constant and occasionally throbbing. Severe headaches are uncommon. A headache may get worse when you cough, sneeze, bend down or do any hard physical work. All of these tend to raise pressure in the brain. Headaches may be worse at night and may wake you.

If the raised pressure makes you sick, it may be worse in the morning than during the day. It may also get worse if you suddenly change position, for example from sitting or lying to standing.

Seizures (fits) are another common symptom of brain tumours. Some people may experience muscle spasms, which could be twitching or jerking of an arm or leg, or sometimes the whole body. Occasionally they can cause moments of unconsciousness.

Another possible symptom is drowsiness. This can happen as the pressure in the skull increases. You may find that you sleep more or that you drop off during the day when you wouldn’t normally.