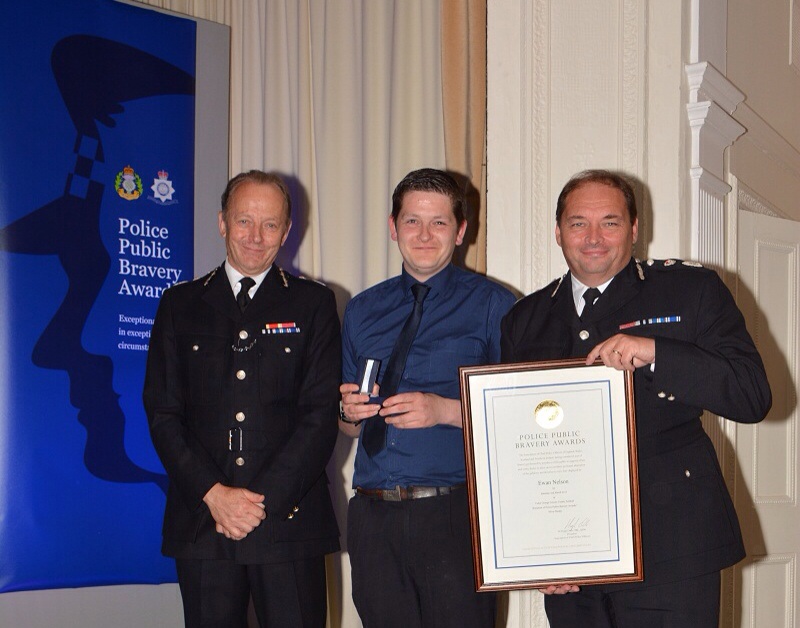 A Solihull man who stepped in to save a schoolboy from a gang of bullies has been hailed a hero after picking up a national bravery medal.

Ewan Nelson was walking past Tudor Grange Leisure Centre, Solihull, on 2nd March last year when he saw the 14-year-old being attacked by teen thugs who grabbed his iPod.

The 34-year-old, from Shirley, pulled the lad to safety but not before one of the group squirted him in the face with pepper spray.

Despite being temporarily blinded he managed to flag down a passing police patrol vehicle and direct officers to the main aggressor who was quickly arrested.

Ewan was nominated by West Midlands Police for a Police Public Bravery Medal and on 19th June he collected the accolade during an ACPO (Association of Chief Police Officers) ceremony in Harrogate flanked by Chief Constable Chris Sims and Metropolitan Police Commissioner Bernard Hogan-Howe.

Two more Good Samaritans who witnessed the robbery drove the injured 14-year-old, who was bleeding from a cut head, to hospital in their own car. The 18-year-olds, a man from Shirley and a woman from Solihull, both received Bravery Commendations.

Solihull Police Detective Sergeant Andy O’Keeffe, said: “Mr Nelson saw a young lad in trouble…his first instinct was to intervene and he responded by running to the boy’s aid, facing up to the bullies and pulling him to safety.

“He was attacked himself, thankfully with no lasting damage, but he undoubtedly saved the lad from being seriously hurt. He then flagged down a passing police car which means the offender was quickly arrested and in police custody.

“The two teenagers also showed great community spirit by stopping their car and turning it into a temporary ambulance so the lad could get swift medical help. All three demonstrated great courage.”

The offender, a Birmingham schoolboy who was 15-years-old at the time of the robbery, was charged with assault with intent to rob, two counts of robbery and assault.

He appeared at Solihull Youth Court on 30th May last year where he was made subject to a 12-month referral order, which sees him agree behaviour contracts with an Offender Management Panel, and pay £300 compensation.