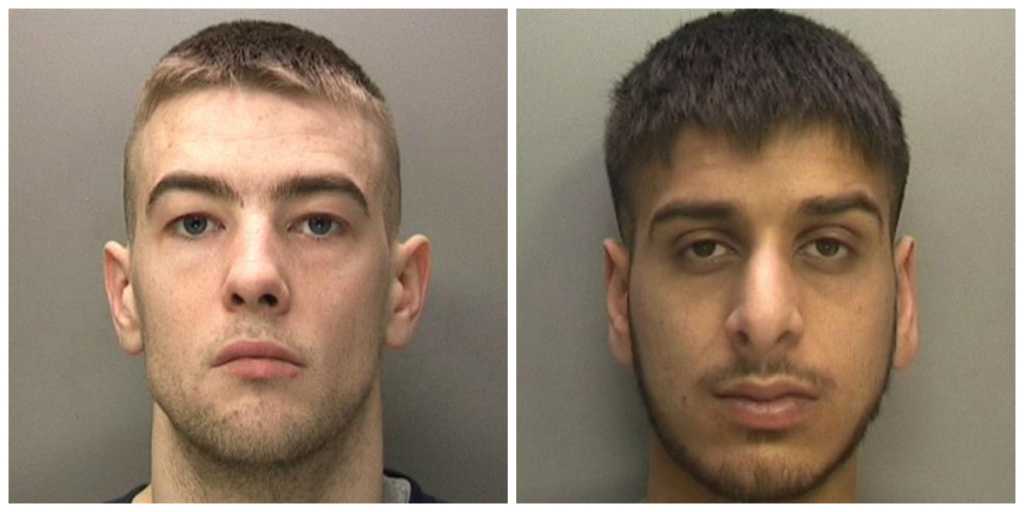 A burglary gang has been jailed after West Midlands Police connected them to a spate of violent break-ins across Solihull and Birmingham.

Daniel Toms and Adil Iqbal (pictured) led a four-strong group that forced their way into properties and made off with jewellery, electrical and other valuables.

During one Moseley break-in they swiped items worth £10,000 and at an address in Knowle left a home-alone schoolgirl cowering under a desk in fear they tried kicking open the front door while her parents were walking the family dog.

They drove off empty handed from addresses in Chatsworth Drive, Dorridge, and Astor Drive in Moseley before smashing their way inside a house in Baldwins Lane, Hall Green, where they took valuables and two sets of car keys.

Four days later they were joined by 18-year-old Taylor Burns as they again targeted three homes in quick succession.

They failed to gain access to properties in Streetbrook Road, Solihull, and Norton Lane in Tidbury Green but then used a screwdriver to force a door lock in St Agnes Road, Moseley, where they made off with a stash of valuables.

However, officers discovered their Fiesta getaway car abandoned in Acocks Green later that night and recovered stolen property plus forensic evidence linking them to the burglaries.

Officers executed a warrant at Iqbal’s home in Douglas Road, Acocks Green, on 22nd November and caught him running off through gardens having clambered out of an upstairs bathroom window.

Toms was arrested following a brief police pursuit in Coventry on 21st December, traffic cops found him in a brook after he’d run off from the stolen Ford Fiesta he was driving.

Burns had previously been arrested on 7th November from his home where a search revealed a pair of poly-gloves from the pocket of a jacket which matched the same unique product code as a pair found in the getaway Fiesta.

And officers also found CCTV of Burns wearing the same jacket while buying screwdrivers and gloves on 23rd October shortly before they attacked homes.

Toms and Iqbal both went on to admit seven burglaries, plus dangerous driving, and at Birmingham Crown Court on Monday (8th May) Toms was jailed for five-and-a-half years while Iqbal was detained in a youth offenders institute for three years two months.

Burns, from Richmond Road in Stechford, admitted three burglaries and sent to a youth offenders institute for 20 months.

A fourth man – Caleb Ilsley from Denham Road, Acocks Green – admitted joining Iqbal during the attempted Knowle break-in on 1st October. He also admitted a burglary in Faulkner Road, Solihull, on 13th March where designer watches and an antique sword were stolen.

Detectives found his blood at the scene after he’d smashed a window to gain entry; he was sent to a youth offenders institute for two years.

“We have proved this group were behind up to 10 burglaries but it’s suspected they were involved in many more, possibly in excess of 40.

“There tactic was simply to knock on doors and, if they didn’t get a response, try to force the door open or simply just kick it open. They put one schoolgirl through an awful ordeal: she heard them trying to hammer their way inside and took cover under a desk.

“Thankfully they failed to get in but their offending undoubtedly caused lots of distress and inconvenience to residents in Solihull and Birmingham – and I’m pleased they’ve been handed lengthy jail terms.

“We also secured Criminal Behaviour Orders against Toms, Iqbal and Ilsley that, from the day of their release and for five years, prohibits them from associating with each other and bans them from entering any driveways or gardens without the owner’s permission.”

West Midlands Police has released dash-cam footage showing Iqbal driving at speeds in excess of 90mph towards Chelmsley Wood late on the evening of 15th October.

Officers stung the tyres of the stolen Ford Fiesta – but despite having two punctured tyres he carried on driving at 70mph in a desperate bid to evade capture. He was finally stopped near the National Motorcycle Museum and arrested for dangerous driving and driving while disqualified.

Toms and Iqbal were also disqualified from driving for 56 and 43 months respectively – bans that start upon their prison release – and they will have to pass extended driving tests in order to recover their licences.