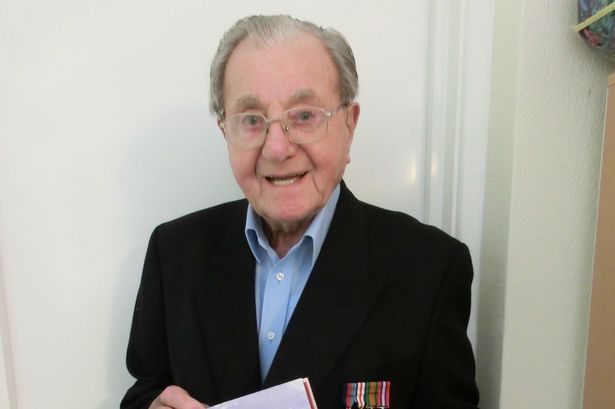 Councillor Joe Tildesley, said he hoped to change the council’s policy of only dedicating streets to those who had died.

“It’s one of the few things you can do to create a lasting legacy,” he said. “These men have unique, inspirational tales of courage which should be remembered.

“The council has a view that we should only name a road after someone once they are deceased. But I want to change that.”

These are the three heroes Councillor Tildesley wants to honour.

Resistance fighter and flight navigator Ken Trueman escaped with his life when his Lancaster was shot down during a raid on a car plant in Brussels on 13th August 1944.

He went onto join a ‘rag tag’ group of resistance fighters.

“We were hit by four light anti-aircraft shells and dropped from 16,000ft to 6,000ft,” said Ken, who was just 21 and a married man when he joined the RAF in 1940. “The fourth hit the petrol tank and set the plane on fire. We grabbed our parachutes and bailed out.

“He must have gone down the plane to see if everyone got away – he was that sort of man.”

Ken was discovered by a villager and taken into the resistance camp, deep in woodland.

“They were a rag tag lot, all young lads who had gone into the woods to avoid going into the labour camps and led by Chief Tom,” he said.

“We lived in the woods and relied on villagers for food.

“We blew up two trains and cut down telegraph poles – anything to cause trouble to German communications.

“But we wouldn’t shoot at the Germans because they would take it out on the villagers.”

Ken, now 92, was rescued by American troops on 10th December. He arrived home the day after his distraught wife, Sylvia, received her widow’s pension book.

The great-grandfather of eight, from Solihull, received a string of medals for his heroism – but said having a street named after him in Solihull would be the greatest honour of all.

“It would fantastic,” he said. “It’s important to remember – we don’t want another war like that again.”

The missions included raids on a German U-boat base at La Rochelle and the Ruhr Valley, as well as the controversial bombing of Dresden.

“For almost 70 years I never spoke about the war, even with my family,” said the 91-year-old, from Blossomfield Road.

“I was one of seven in the crew.

“War broke out on a Sunday and the day before I had started work at Joseph Lucas Ltd. I joined the RAF the day after.

“I had always wanted to fly but it became obvious I wasn’t a born pilot so I became a navigator instead.

“We were part of the Dresden raid which caused a certain amount of controversy. Hindsight is a wonderful thing of course.

“We were very lucky, we were never hit by anybody.

“When we were flying, we built a mental cocoon within which we couldn’t be hurt, only other planes got hit.

Peter left the air force in 1947 and returned to his job at Lucas.

The widower, a dad and grandad, received a string of medals for his service but said he would love to be remembered in a street name in Solihull.

One of “The Few”, he helped defend the country against the German Luftwaffe.

“It was hairy,” said the great-grandfather of four.

“It wasn’t what you would call a peaceful time.

“But it was an exciting time to be alive.”

Ken, who later became a quantity surveyor in Solihull, said he had fond memories of flying the Spitfire.

“It was always surprising you with the things it could do,” he said.

“It was a wonderful aircraft – an absolute cracker.

“When in combat it could do a steep turn, flying vertically with the whole aircraft juddering – it was never designed for that, but it could do it.

The former flying ace, from Berryfield Road, is one of just 30 surviving Battle of Britain pilots.