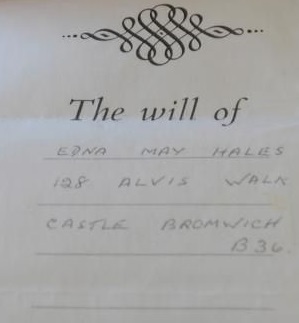 The crumpled note was found stuffed inside one of many bags and boxes that cluttered penniless spinster Edna Hales’ front room by carers who faced the task of clearing the squalid property following her death.

Mrs Phil White, who had tended to Edna for 14 years, fished out the lined notepaper as she was about to throw the bag in the bin. Her quick-thinking has earned a host of West Midland charities thousands upon thousands of pounds – because the neatly written letter was Edna’s last will and testament.

It revealed that the 91-year-old, who wore cast-offs and bought cut-price bent canned food, was sitting on an untouched fortune of close to £150,000.

The fiercely independent old lady had resented spending a single penny, she even had her phone cut off for failing to pay the bill at her terraced council house in Castle Bromwich, where she lived for 40 years.

After an advertisement in The London Gazette, the publication of record for legal appeals, failed to uncover any next-of-kin, Edna’s huge wealth has been distributed to a string of local causes. To date, seven named organisations have received a slice of Edna’s hidden wealth – five of them more than £25,000 each.

In her will, Edna simply instructed executors to “give to the blind, give to the homeless…”

Phil, community services officer for Castle Bromwich Lions, was named executor of Edna’s will – and chose NICE as one of the many beneficiaries.

Although hand-written eight years ago, the will was legally binding because Edna had ensured it was signed by witnesses and authorised by a solicitor. The law firm involved has long gone, but the pensioner’s final wishes had to be carried out.

Edna’s life remains an even greater mystery than the source of her wealth. She was brought up in Erdington and it’s believed she may have worked as a secretary. Paperwork they’ve uncovered suggests at least some of Edna’s mountain of money was left to her in wills.

Edna’s very private life began to unravel in July 2012, Phil was concerned that she was not answering her phone so she contacted the police. They forced entry into the Alvis Walk property and discovered the elderly woman collapsed on the floor.

After a stint in Heartlands Hospital, she was transferred to a nursing home, but her health continued to deteriorate. She died on 4th November 2012 and her ashes were scattered at Robin Hood Crematorium – one of the few unambiguous instructions in her will.

Edna left her helpers with one more riddle before she died.

“She did tell us there was someone ‘up there’ waiting for her and he was an electrician,” said Phil. “We got the impression he died in the war.”