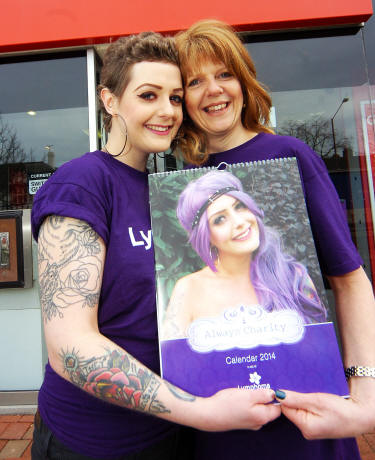 Business woman and fundraiser Charity Hewitt is celebrating after her fundraising for the Lymphoma Association reached an impressive £18,000.

This latest mile-stone was hit after kind-hearted employees at Santander decided to team up with Charity after she and her mum, Anne Rendle, went to pay in funds they had raised last year at the Shirley branch.

After finding out about why Charity was depositing so much money the Midlands Manager, Tracey Bantock, and her team decided to raise money in honour of Charity. Branches across the region raised £1,945 after buying copies of Charity’s calender, holding a purple week, selling cakes and employee Wayne Brown grew a beard during ‘Movember’.

Charity said she and her mum were blown away by the kindness of everyone at Santander for what they have done to raise money and help raise awareness about the disease.

She added: “We really are very humbled by their generosity in helping us hit our current target.

“All I want to do is help people be aware of their body, be aware of changes and don’t delay going to the doctors because they can be helped.”

Unbeknown to Charity her cause and story was one close to the company’s heart after Shirley employee, Navinder Charna, had recently lost her battle with the disease.

Tracey said: “When Charity came into branch that day she gave us an opportunity to do something for Navinder and for her and others suffering from Lymphoma. It was a privilege to hand her the cheque as she has been an amazing inspiration to us and many others.

“Thank you for giving us the opportunity to help in a small way.”

Charity was diagnosed with Hodgkins Lymphoma last April and was given the all-clear in December.

Since being diagnosed the 29-year-old has raised money for the Lymphoma Association through coffee mornings, profits from her business and sales of her calendar. She set up Always Charity with her mum last year in a bid to help Charity beat the blues after doctors told her chemotherapy would leave her vulnerable to germs.

They make and sell vintage inspired greetings cards, tea cup candles and tea cup cacti with a small portion of the profit going to the Lymphoma Association.