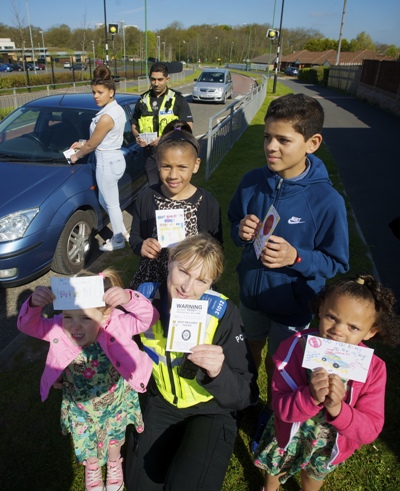 Officers from Solihull Police have praised children and their parents for their assistance in making roads outside local schools safer – and are keen for this to continue as they return from their Easter holidays.

As part of Operation Zig-Zag officers aimed to educate motorists about the consequences of inconsiderate and obstructive parking, and even enlisted the pupils themselves to drive home the messages.

It soon became clear that in some cases the pupils, some as young as five, had a better understanding of the importance of road safety than their parents – so officers decided to ask these pupils to design posters and help them pass on safety advice.

Officers were so impressed with the hundreds of designs submitted that they transformed some into displays for outside the schools and the front of mock fines.

Sergeant Imran Mirza was keen to praise the efforts of all involved, but equally determined to ensure standards were maintained: “Ignoring parking restrictions can have real safety implications not just for the children but other drivers and it was clear that some drivers needed to be reminded of this.

“The children’s artwork is a great example of showing just how simple our advice is. Advice such as the dangers of parking on zig-zags, which must be followed even if the driver is running late or the weather is bad!”

Officers continue to patrol outside schools at the beginning and end of the day and pass on safety advice to the minority of drivers who still choose to ignore advice.

Sergeant Mirza added: “In recent weeks we’ve even transformed the artwork into a mock fine. On one side is the children’s advice and on the reverse is a mock parking ticket. The choice for drivers is simple – park safely or risk a fine.”