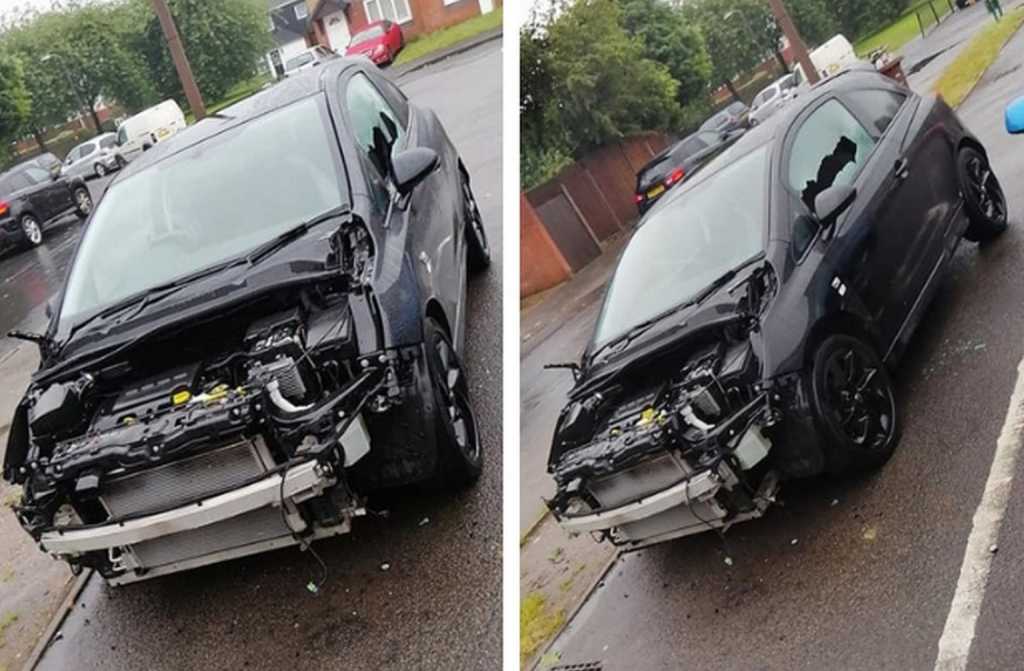 This is the remains of what was a £14,000 Vauxhall Corsa after it was stripped of its parts by heartless thieves.

The vandal attack took place just hours after another Corsa Cannibal attack in nearby Castle Bromwich.

This latest incident has left the 24-year-old victim – a car sales advisor – out of work and out of pocket.

Wanting to remain anonymous, the victim said: “They took the bumper, grill, headlights, bonnet and my front number plate.

“I went to pick my partner up on Tuesday night at around 10pm and, when I came back, I parked the car on our drive.

“I woke up like usual around 6am to take the dogs for a walk and, when coming back home after walking our second dog, I realised the front of my car was missing.

“I wondered what happened because the car looked like it had been in a head-on crash… but then I realised the passenger window was smashed.

“I’m assuming they smashed the passenger window to pop the bonnet and then carried on from there.

“There were screws all over the floor and, due to the rain throughout the night, everything under the bonnet was drenched.

“When the recovery truck came to get the vehicle and they were reversing it onto the ramp, something started smoking and stunk of a burning smell… so I’m assuming this was water damage to either the engine or the radiator.

“There was glass all over the passenger seat and the car was just a wreck.

“I called the police at 6.30am as soon as I noticed and they said that I would need to fill an online form out. No-one came out to look at the car.”

The victim, who didn’t want to provide her address in case of another attack, added: “I go to work and sometimes do 50 hours a week.

“For them to come and destroy one thing I pay the most for, it’s unfair and so selfish.

“I haven’t heard from the garage that it’s gone to yet but I believe if the engine isn’t working then it’s probably a write off.

Their silver Corsa was stripped of its parts in the early hours of Sunday morning.

Lisa, 31, was left with no option but to rely on extended family or walk in the rain with her ten-month-old-boy and three-year-old daughter.

Husband Andrew, a self-employed officer builder, also had to miss valuable time off work while he sorted out a replacement.

Lisa added: “They knew I have two children and it’s just disgusting. It’s disrupted us. It’s had a huge impact on our family.”

The family parked their five door 15-plate Corsa on the driveway, which is set away from their home, in Park Hall Crescent in Castle Bromwich

It is thought the make is targeted by crooks because of their popularity with younger drivers.

This means they are more likely to be involved in a collision, with drivers after a cheap fix.

Entire streets have been targeted by criminals who are able to complete the task within minutes.

The stolen parts usually end up going through illegal ‘chop shops’ and on the second-hand market.