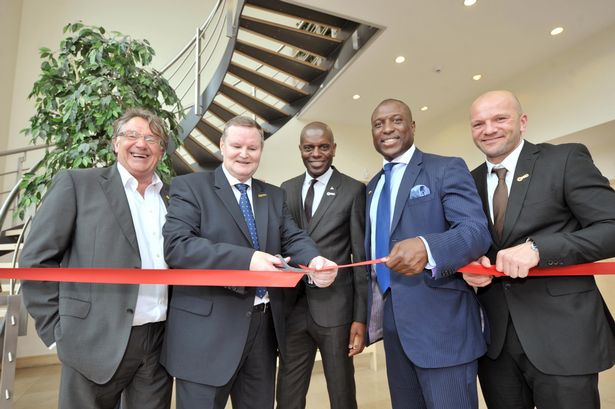 Football legends have been in Solihull this week to celebrate a charity supporting former players who have fallen on hard times.

Ian Taylor, Michael Johnson and Kevin Campbell were just some of the high-profile names at the new Xpro offices at Wellington House, Solihull.

With as many two out of every five players going bankrupt within five years of retirement, according to a recent study, the charity is offering advice on everything from wealth management to addiction, debt and even attempted suicide.

But why do so many ex-pros fall on hard times?

Ex-Aston Villa player Ian Taylor, explained: “A lot of players don’t plan to do anything because they think it will last forever, and you’ve also got the players that have to finish through injury unexpectedly.

“For those players it’s even more difficult to adjust to the outside world, particularly if you’ve been in football from the age of 8, 9 and 10, which a lot of players have done.

“I came through the non-league circuit so I had a normal working life but you can count the players that have had that upbringing on one hand really.

Charity chief executive and former Stoke City player Geoff Scott added: “We believe it’s because of lack of education and awareness of life after football.

“When a player retires from the game, there’s no preparation or support to help them make that adjustment.

Scott said even those on mega wages can suffer on retirement from the beautiful game.

Former Arsenal player Kevin Campbell said leaving the pitch permanently could feel like “losing a limb” if they weren’t prepared.

“The transition wasn’t really bad for me but for a lot of friends, it’s like switching the light off,” he said.

The charity is currently auditing forty former players who are facing bankruptcy and have lost a total of £120million through bad investments.

“Players on good money shouldn’t go bankrupt at the end of their careers,” said Campbell.

“The player concentrates on football and he gets his agent and financial advisors to look after his money.

“Most players are working class lads who need to rely on so called experts to look after them.

“But the experts can’t be doing that good a job if all these players are going bankrupt.”