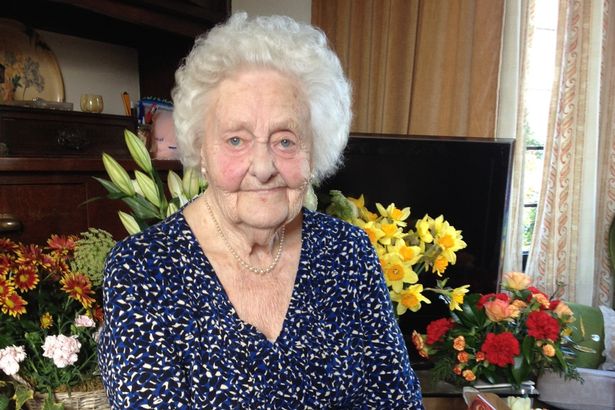 The centenarian, who survived cancer at 95, celebrated her landmark birthday on Sunday 16th March with family and friends at Bentley Heath Cottages.

Elizabeth, who has never married, was born in Birmingham and moved to the cottages, on Tilehouse Green Lane, after her parents died. She has lived at the retirement development for the past 36 years and has become the eldest resident there.

After working in an office for a short time, Elizabeth joined the Land Army in 1942, where she served in the Women’s Timber Corps. She received official recognition for her Land Army work in 2008 when she was handed a medal of honour.

“I had never worked so hard in my life,” said Elizabeth, whose father was in the navy during the Great War. “We had some memorable times, but it was extremely hard work.”

Elizabeth, who has outlived her brother and sister, puts reaching 100 down to her dedicated work ethic.

“I was never one who pretended to work. I’ve worked hard all my life. I looked after my parents until they died and even today I do what I can.

Elizabeth was diagnosed with bowel cancer when she was 95 and despite also contracting the C Diff bug went on to make a full recovery.Despite many offers, Elizabeth chose not marry and start a family of her own.

“My mother and father used to say it was because I was too particular,” Elizabeth added.

“I do have regrets that I didn’t start a family and have someone to look after me in my old age, but it was my decision. I do have nieces and nephews and close friends who come to visit.”

Sunday’s celebration at Bentley Heath Cottages was attended by the Mayor of Solihull Councillor Joe Tildesley.