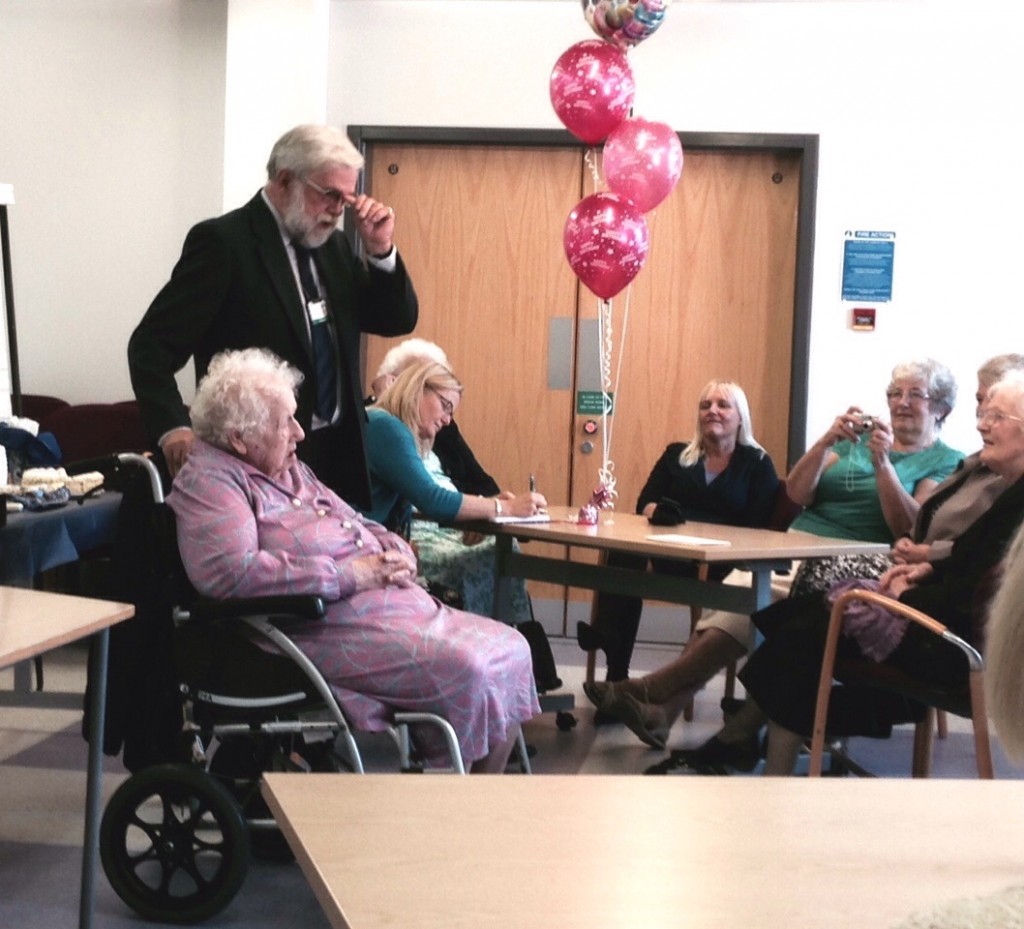 An extraordinary hospital volunteer who worked as a nurse on the current Solihull Hospital site during the Second World War has enjoyed a surprise tea party from friends and colleagues to mark her 100th birthday.

Millie Skinner has volunteered at the Lode Lane site ever since the Friends of Solihull Hospital was founded 61 years ago and has helped the group raise around £1 million in that time. She still attends monthly committee meetings despite turning 100 on Thursday 16th October and is as passionate as ever about Solihull Hospital and healthcare in the town.

Chairman of the Friends of Solihull Hospital Bill Jones paid his tribute to Millie as he wished her a very happy 100th birthday.

He said: “Millie is a truly remarkable woman – she is a living history of the hospital and of the Friends of Solihull Hospital group. She started working at the hospital site when it was still the Workhouse, before the war in 1939 meant it became an emergency hospital and she began working there as a nurse.

“In 1953 it was decided to form the Friends of Solihull Hospital and Millie has been a committee member ever since. She was always extremely active but obviously because of her age physically she is not able to be as active now but mentally she is still as sharp as anyone.

“I know some of the old managers who worked here who used to say if they heard Millie’s voice coming along the corridor they would find the nearest exit – she was and still is a force to be reckoned with but so passionate about the hospital.”

On Saturday Millie was thrown a surprise tea party at the hospital where friends, family and colleagues presented her with a cake, flowers and a cut glass trophy to mark the occasion and express their thanks for her extraordinary dedication to Solihull Hospital.

Bill added: “We kept it a surprise. She was picked up by her daughter and she thought they were just going for a drive so it was a surprise for her when they pulled up at the hospital. She really enjoyed it and was recounting lots of old stories.

“She was telling everyone about the first major purchase by the Friends which was a patient lift that cost £3,000. I hate to think how much that would cost nowadays!”

Andrew Clements, head of operations at Solihull Hospital, part of the Heart of England NHS Foundation Trust, was there to welcome Millie on Saturday and said she is an ‘inspiration’.

He said: “It was wonderful to spend some time with Millie on this special occasion and hear her talk so passionately about the hospital and her experiences over the years. She is a real inspiration to us all and we thank her for the wonderful dedication she has shown to Solihull Hospital.

“The Friends of Solihull Hospital is a vitally important group which has made a huge difference to our hospital over the years and we hope they continue to do so for many years to come.”