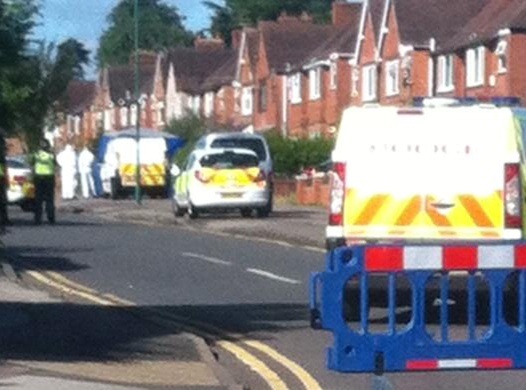 A man remains under police guard at hospital following the deaths of a couple at a house in Solihull yesterday morning (7th July).

Police launched a murder inquiry after receiving an emergency call at around 5.15am yesterday, following a disturbance at a house on Hermitage Road.

Officers were quickly sent to the scene, where the bodies of a 58-year-old man and a 50-year-old woman were found.

A 23-year-old man was found with serious injuries and was taken to hospital for treatment, where he remains this morning. The young man was arrested on suspicion of murder by officers at the scene and he remains under police guard at hospital.

Police have revealed this morning (8th) the two victims died from stab injuries.

Detective Inspector Martin Slevin is leading the double murder inquiry. “This a serious and devastating incident which has led to the deaths of a man and woman, and a young man continues to receive treatment.

“All three people are known to one another and at this stage we are not looking for anyone else in connection with the deaths.

“Detectives have been working at the scene all day, conducting forensic enquiries and speaking to local people and anyone who has information to help our inquiry but is yet to speak to police is urged to come forward as soon as they can.”

Specially trained liaison officers are supporting family members at this time and are continuing to try and locate other relatives.

DI Slevin added: “We are yet to formally identify the man and woman who lost their lives and a post mortem examination is yet to be conducted.

“With some family members yet to be informed of this morning’s tragic events it would be inappropriate to speculate on what has taken place, however one person is under arrest and we wait for an opportunity to speak to him about the two deaths.”

Hermitage Road was closed for most of Monday whilst forensic enquiries were carried out at the address.

Chief superintendent Alex Murray, commander of Solihull Police, said: “This is a shocking and deeply upsetting incident in which two people have tragically lost their lives.

“Many people who live locally will undoubtedly have been concerned and distressed by today’s events and I’d like to reassure the community that we are doing everything possible to investigate this terrible crime.

“We have officers out in the neighbourhood to provide a visible reassurance and to offer support to anyone upset or concerned by what has happened. House to house enquiries will also be conducted.”

Anyone with information to assist the police investigation should call Force CID Homicide Team by dialling 101 or speak to Crimestoppers anonymously on 0800 555 111.