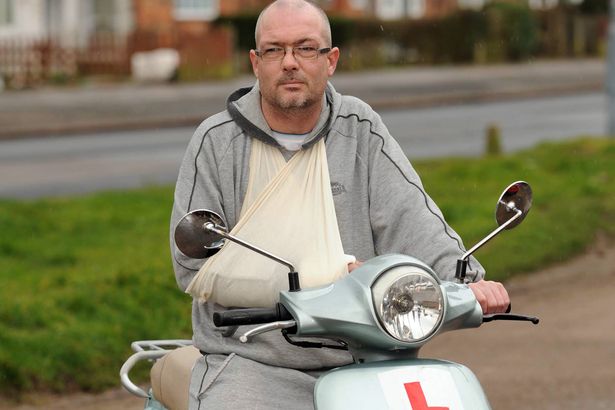 A hit-and-run victim has told how he was left for dead after being knocked off his scooter by a 4×4 which then sped off in rush-hour traffic.

Neil Williamson, 39, suffered a fractured wrist, cuts and bruises and shock following the collision on the A45 Coventry Road, near Birmingham Airport.

The dad-of-four was on his way home to Acocks Green, following his first day’s work after eight months on the dole when he was hit at 7.00pm last Thursday (13th).

Police are investigating and Mr Williamson, 39, has also vowed to take out a civil action against the driver of the car if they can be traced. He told the Birmingham Mail: “I could have been killed. I have suffered a fractured wrist and internal bleeding which will keep me off work. I am also still suffering from shock. I cannot believe the driver did not stop.”

Mr Williamson is now facing further financial pressure because he will not be able to continue with his agency job as a road maintenance worker while his recovers from his ordeal.

He said: “I was edging into traffic on my 125 scooter. It was crawling along and other drivers were letting me into the line of traffic. However, the 4×4 came from nowhere and knocked me off the scooter. The driver did not stop but just hurtled away without even waiting to see how I was. The 4×4 was like a tank and my small scooter did not stand a chance from the impact.”

A spokeswoman for West Midlands Police said the incident was being investigated by officers – and if anyone has information on the crash, they are asked to contact police on 101.