New Shirley Library is ‘on time and on budget’ 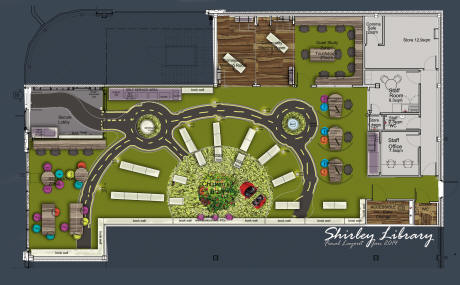 Councillor Kate Wild, Cabinet member for community services at Solihull Council, has described the new Shirley Library during an unveiling of the architect’s plans as “a new Library for the 21st century”.

It is scheduled to open this summer when the Parkgate development opens its doors.

The new building will be state-of-the-art and modern in every way and, including the cost of rent, will run at the same annual expenditure as the old building.

In total it will have cost the Council just £150,000 – on top of the proceeds from the sale of the old library – to create.

This is what will be inside the new building:

* There will be 20 computers compared to the current five.

* Eighty-six per cent of the old book stock will be moved to the new library – which is exactly the same size as the old library, but with 25 per cent more useable space.

* There will be a specially gated children’s library with a ‘magic apple tree’ for reading under, space for an interactive vehicle, a fun zone for children and plenty of books.

* Two community meeting rooms and a quiet study room which is an acoustic room with all external noise shut out for those wanting to read or study in silence.

* Many of the bookshelves will also be moveable to enable better use of the space.

* The Solihull Connect Contact Centre will also be housed at the library.

“Councils up and down the country are shutting libraries while we are creating flagship ones – libraries for the 21st Century,” said Councillor Wild, who pointed out that it was only 800 yards from the old library and was now located on two public transport routes instead of one.

“The new library will be a fabulous thing for the people of Shirley and everyone behind the project is very proud, excited and looking forward to the opening.”