Objections to Muslim Cemetery in Catherine-de-Barnes 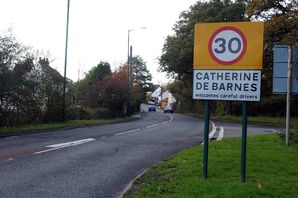 Solihull Council said it had received a number of letters against the plans to build a 4,000-plot Muslim burial ground in the village of Catherine-de-Barnes.

Local people said the development was inappropriate and would cause traffic problems in the village.

More than 900 people have signed a petition against it, campaigners said.

Councillor Bob Sleigh, who represents the area, said there was enough space for burials at the two main cemeteries in Solihull Borough, Widney Manor and Woodlands. He said: “There is already provision to meet the needs of the Muslim Community because Widney Manor has capacity up until 2023 and has a separate area for Muslim burials. The objections are in principle about the fact this would be built on greenbelt land. People want to protect the distinctive character of the village.”

Dr Issam Ghannan, who is an Imam in Solihull, said there was an ageing Muslim population in the area and burial plots were filling up. He said: “It is needed because Muslims need to be buried in their own section of land, next to others who have the same faith. The plot of land is isolated. It’s not going to be built in the middle of the village, it would not cause many problems with traffic.”