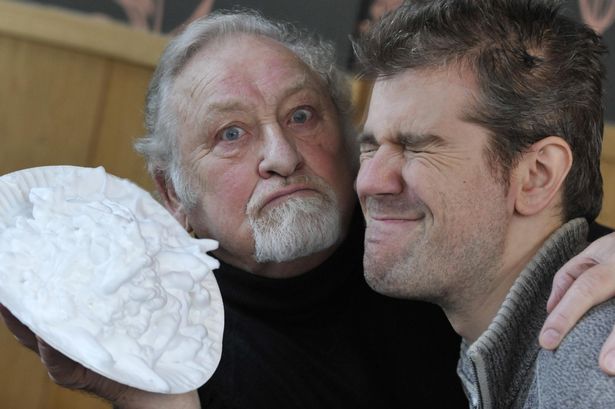 There was one question on everybody’s lips back in the day – just who was the Phantom Flan Flinger in cult kids’ TV show Tiswas?

Each week he would pounce on an unsuspecting celebrity guest.

Now 78, Benjamin ‘Benny’ Mills, from Solihull, a former TV extra and retired taxi driver who worked for TOA (the Taxi Owners’ Association) spoke of his mysterious job on Saturday morning’s Tiswas – a show that is 40 years old this month.

The Phantom Flan Flinger was as synonymous with the riotous series as stars Chris Tarrant, Sally James, Bob Carolgees and Lenny Henry.

Benny grew up on Stoney Lane, Sparkhill, and became a mechanic with the 1st Battalion Dorset Regiment. He served in Korea during 1953-54 and played a home-made washboard in a group to entertain his fellow troops.

Benny now lives near Solihull with wife June, “I think I used to get about £100 a week when I was flinging flans, which was good money in those days for what I was doing. I was also an extra in many shows from Boon to Crossroads and knew a lot of the stars of the day from Noele Gordon to Chris Tarrant. Any money I got for my Tiswas role used to go into my taxi account so I never saw it as such. I never used to do it for the money, just for the fun. My daughter, Karen, was on Tiswas as the Baby Bucket Bunger. But while my role was secret on the show, I also appeared as myself on Blue Peter and Larry Grayson’s Generation Game with Freddie’s Pigs Trotters – a group which used to make the sounds of instruments using our mouths!”

Looking back, Benny says he enjoyed his ‘15 minutes’ of fame. “Chris would tell me who I could ‘flan’ and when, but not Cliff Richard because he was wearing contact lenses. And not Sally James because she was allowed to keep looking good. I still don’t get recognised now,” he chuckles. “But that’s probably because most of my fans are now 50!”