Plans for 400 homes could be back on the table 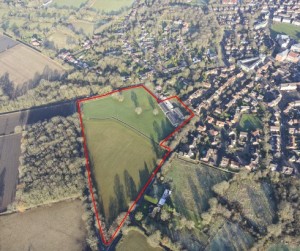 Controversial plans to build more than 400 homes in Cheswick Green and Dickens Heath could soon be back on the agenda after Solihull Council was forced to make a U-turn on its Local Development Plan (LDP).

Land at Braggs Farm, Cleobury Lane and Mount Dairy Farm have been opened up for development earlier than the Planning Inspectorate and Solihull Council anticipated when the LDP was given the stamp of approval in December.

Just seven months after the policy, which sets out development of towns, villages and countryside up to 2028 was adopted, the Council has had to re-think its policy after figures showed a shortfall in the number of houses to be built over the coming five years.

The Council is 440 houses short of its housing requirement and Braggs Farm, Cleobury Lane and Mount Dairy Farm development start dates have been brought forward to bridge the gap to compensate for the lack of housing.

The news is a massive blow to campaigners who are outraged at the proposals and claim the sheer number of homes in the area would cause more flash flooding and leave schools, roads and medical services unable to cope with the extra numbers.

Speaking when the applications were originally up for debate, Chris Noble, Chair of the Cheswick Green Parish Council, said if all of the planning applications are granted permission the local infrastructure would not cope.

In January the planning committee unanimously refused applications to build houses on the three sites as they did not conform to the LDP – but in a statement released by Solihull Council this week it confirmed there was scope to make such changes in the original LDP.

It added: “The policy position statement is not new policy, it is a factual update responding to the High Judgement and the operation of the phasing aspect of Local Plan Policy P5.

“Policy P5 makes provision for sites to be brought forward from later phases of the plan.”

Earlier this year the High Court ruled Solihull Council’s plan to earmark land at Tidbury Green Farm and Lowbrook Farm as Greenbelt but also to be developed on in the future was unlawful.

The Council has applied to the Court of Appeal to appeal the judgement made by High Court in a bid to revert the situation back to the original Local Plan and the 2016/2023 schedules.