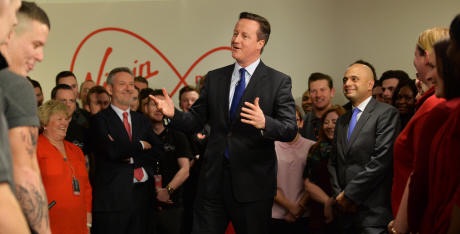 Prime Minister David Cameron and Chancellor George Osbourne spearheaded the Conservative campaign in Solihull, both visiting the borough to promote the Tory Party’s committment to business and the economy.

The PM visited Virgin Media on Coventry Road to welcome the ‘substantial investment’ the firm – and parent company Liberty Global – is making in UK broadband, calling it a ‘vote of confidence’ in the UK’s long-term economic plan.

The plans are for a fibre-rich network to approximately four million additional premises over the next five years, set to create hundreds of jobs and give a multi-billion pound boost to the UK economy, which UK regulator Ofcom has termed the world’s most internet-based.

Mr Cameron said: “These 6,000 new jobs and apprenticeships will mean financial security and economic peace of mind for thousands more hardworking families across the country.

“Together with this Government’s rollout of superfast broadband which has now reached more than two million UK homes and businesses, this additional private investment will create more opportunities for people and businesses, further boosting our digital economy and helping secure a brighter future for Britain.”