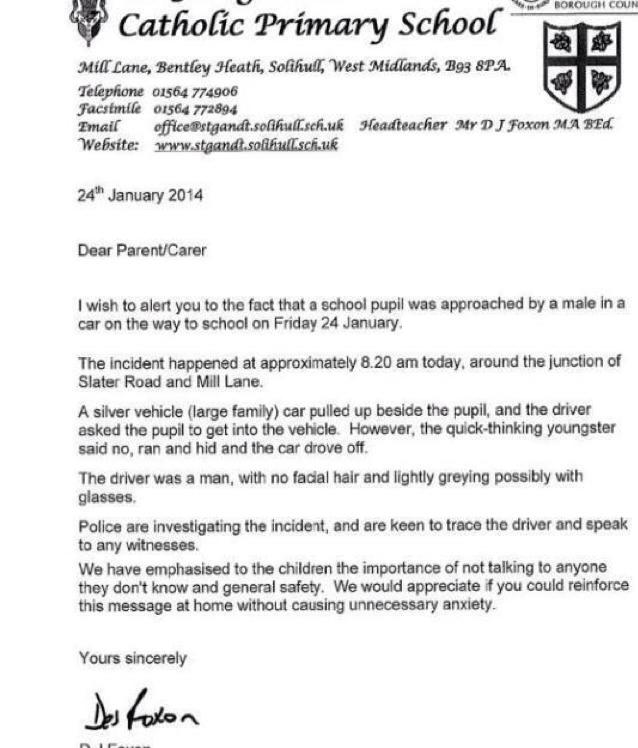 West Midlands Police said the incident happened at approximately 8.20am on Friday morning (24th), when a man in a silver car pulled alongside the girl in Slater Road near the junction with Mill Lane, Bentley Heath, and asked her to get in. She immediately said “no”, then ran off and alerted her school, who called police.

The driver of the car is described as having no facial hair, lightly greying and possibly wearing glasses.

The girl’s school has not been identified but other local schools sent warning letters or emails to parents yesterday.

Superintendent Andy Bullman said: “We treat any reports of this nature very seriously  and a thorough investigation will be conducted. It’s important children are reminded about ‘stranger danger’ safety messages, never to get into cars of motorists they don’t know, and to always report suspicious behaviour so we can investigate. But at the same time it should be stressed that the girl was not injured or physically touched.”

Police said officers were working together with Solihull Council to reassure parents and advise of the need to be vigilant.

A Solihull Council spokesman said: “An incident happened outside one of our schools, which the police are investigating. As a precaution we advised other schools in the borough to be vigilant. We would also encourage parents to remind their children about the importance of not talking to people they do not know, without causing unnecessary anxiety.”

• Never go off with strangers, take things from them or get in a car with them

• Make sure their parents know where they were

Police are investigating the incident and are keen to trace the driver and speak to any witnesses – if you have any information, call Solihull Police on 101.