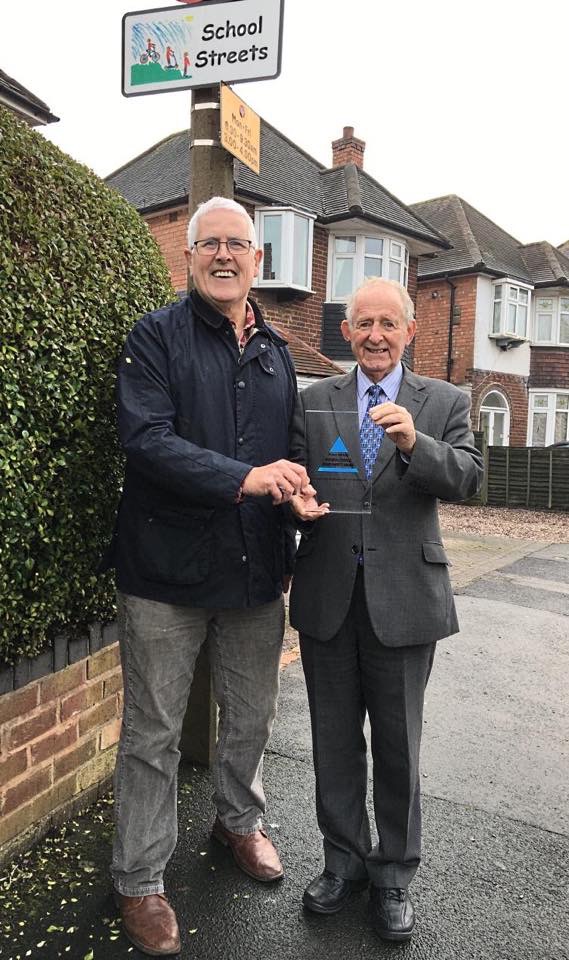 The awards celebrate the most outstanding examples of international road safety initiatives, and Solihull’s School Streets scheme was recognised alongside other imaginative schemes from Singapore and the Netherlands.

The School Streets scheme was introduced at three pilot schools in 2017.

It aims to create a safer and more pleasant environment for everyone around schools by limiting traffic there at key times. It also promotes active travel to school by walking and cycling, which in turn, helps to reduce congestion and pollution in the area.

School Streets Phase 2 has been approved and consultation will take place in the New Year.

Councillor Ted Richards OBE, Cabinet Member for Growth and Infrastructure Delivery, said: “I’m so pleased Solihull Council has been recognised for this innovative project that I helped to launch in 2017. Traffic and parking in the roads around schools is a constant problem for many parents and residents, let alone the issue of road safety for pupils.

“School Streets came from a desire to find a practical solution to traffic and safety problems around schools at opening and closing times. It also encouraged parents and pupils to travel to school without the car.”

Councillor Ken Hawkins, Cabinet Member for Environment and Highways, said: “The award is a testament to the hard work of the team who delivered this successful scheme. It has helped reduce traffic and encouraged parents to leave the car behind.

“Residents close to schools are also positive because their drives are no longer blocked by inconsiderate parking. Schools see the benefit because it makes the drop off and pick up times better for pupils and parents alike.

“The scheme will help to improve air quality around schools as we know air pollution is a risk to everyone’s health, but is especially serious for children.

“The three pilot schools have adopted the scheme permanently and three new schools are keen to go live following a formal consultation in the New Year.

“Well done to the team and I look forward to seeing many other Solihull schools adopt the scheme.”