Solihull aid worker will stay in Afghanistan despite horror attacks 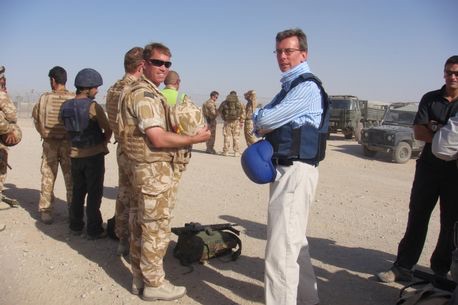 A British aid worker from Solihull has spoken of his resolve to continue working in Afghanistan – despite being fearful following a string of horrific attacks on fellow aid workers.

Mark Harvey, aged 56, is currently working as an Infrastructure Advisor for the Department for International Development (DFID), heading up the road-building and infrastructure programmes in Kabul.

He is nearing the end of his two-year stint there during which he has been working on some of the major road networks in the city.

Speaking about the recent horrific attacks on British aid workers, which include the deaths of Alan Henning and David Haines, Mark said: “These are absolutely tragic incidents and you obviously do fear for your own safety.

“There is also a sense of guilt because you feel relief that it is not one of your own colleagues. When something like this happens, we review our security and my colleagues are encouraged not to take any risks. Colleagues become very seriously sombre at times like this but we also feel a sense of determination to carry on.

“We have a very important job to do and this only makes us more determined to do it right.”

British aid workers Alan Henning and David Haines were murdered by the Islamic State of Iraq and the Levant (ISIL), a radical Sunni Islamist group.

Mark, who used to work as a civil engineer before he decided to become an aid worker for the DFID, has a wife and two children, aged 17 and 13, who currently live in Cambodia.

Mark said: “My wife works for the World Bank and I visit them every six weeks,”

“It is hard not seeing them but we have got ourselves into a routine now.

“Due to the nature of my work, we have to have two weeks off every six weeks, so it means I get to see my family on a regular basis.”

Mark has also worked in Helmand on smaller road projects there.

He was talking on the day of the London Conference on Afghanistan recently where 59 countries reaffirmed their commitment to supporting Afghanistan to become a secure and stable nation after drawdown is completed at the end of the year.

Speaking from the LCA, International Development Secretary Justine Greening said: “After 13 years of bravery and sacrifice from British and international armed forces, civilians and aid workers, and the people of Afghanistan themselves, this country now has a chance to set the course of its own future.”