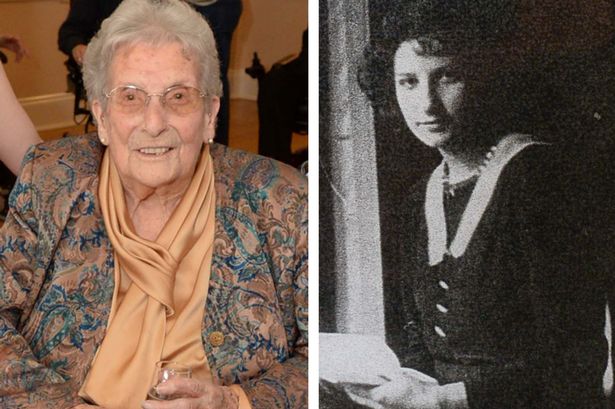 Madge Andrews celebrated her 105th birthday and put her long and happy life down to family, taking part in sports and a nice glass of wine – served at room temperature.

Madge celebrated the landmark by throwing a tea party at the Royal Star & Garter Home in Solihull, with her extended family – seven grandchildren and eight grandchildren – an array of friends and the Mayor of Solihull all in attendance.

She was born in Strood, Kent, and became an apprentice to a Royal dressmaker, delivering clothes to Windsor by donkey and cart.

Madge married Douglas in 1934, who served as a Lieutenant Colonel in the Army. Together they had three children, Richard, 77, John, 74, and Janet who died of cancer aged 50, in the same year as her father did, aged 86.

Madge said: “I brought up three children on my own while my husband served in India during the war.

“My children have always been my first joy.

“I enjoy my food and I like a drink of wine twice a week.

“I like sports, I played tennis until I was 82 and I like watching Wimbledon and the Davis Cup. I have lived in Scotland so I know a lot about Murray.”

Richard, a retired insurance broker from Knowle, said of his mother: “She was an apprentice to the Royal dressmaker when she was very young, about 16. She used to do the stitching and they used to take the garments away on a cart.

“She’s very content and fulfilled in this home. She is still so much in love with her family and she’s very alert. She asks about everyone. She has a nephew, Philip, in California who is 86 and he rings her every Sunday and they chat about his vineyard.

“She takes part in the activities here including exercise classes with balloons and balls and her main joy is doing crosswords.”

Solihull Mayor Councillor Joe Tildesley, said: “She has a wonderful life and isn’t it great to see four generations of her family?”

Michelle Danks, from the home, said: “She loves to join in and won’t stop until the activity is over.

“Madge is great fun to be around and has a great sense of humour.”