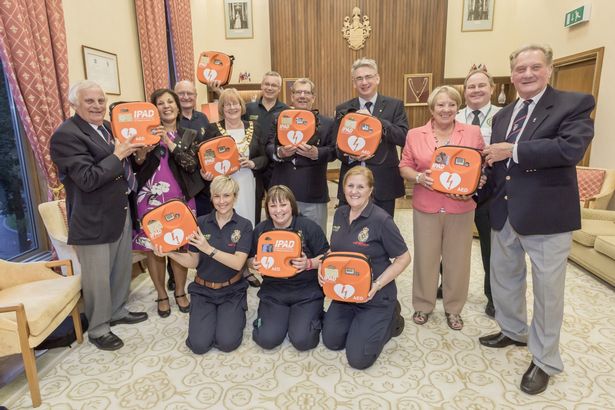 One of nine defibrillators donated to the Solihull borough helped to resuscitate someone in need on its first day of use.

Solihull Lions donated the defibrillators, worth over £10,000, to FastAid Community First Responders (CFRs).

The presentation of the lifesaving equipment was made at Solihull mayor’s parlour.

Mayor of Solihull Councillor Glenis Slater praised both the roles of the Lions Club and the CFRs and stressed the importance of voluntary groups within the borough.

She said: “These two organisations both do tremendous good for the community and thanks to Solihull Lions our local FastAid volunteers can continue with their wonderful life saving work.”

FastAid was formed in Solihull 10 years ago and some of the defibrillators are dated back to that time.

FastAid chairman Richard Jay said: “We decided to launch an appeal to enable us to get right up to date with the latest models and also to upgrade to ECG monitors.

“This incredible donation has taken us a long way towards that goal.

“They will be issued to the ten CFRs within central Solihull and we will now, for the first time, have an ECG monitor based in our scheme car.

“This will make such a difference to patient care. We are extremely grateful to the members of Solihull Lions Club for their generosity.”

Paul Jolly, President of Solihull Lions, said: When we heard of the immediate need for replacement defibrillators, it seemed such a worthwhile charity for us to support.

“It is good to know that the CFRs within Solihull now have the best equipment and we are delighted to have played our part in that.”

He said: “One of the defibrillators donated by Solihull Lions, in its first day of use, has contributed to a resuscitation in our town showing how valuable it is to have a fully equipped and a fast response when someone suffers a cardiac arrest.”