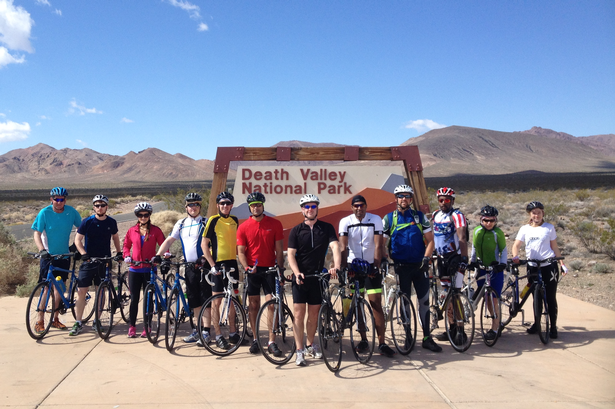 Dean Beard, has helped raise £50,000 for charity by leading a team on a cycle ride across Death Valley – the planet’s hottest place.

Dean, from Chelmsley Wood, is a full time international expedition leader and guides people around the world on some of the most toughest challenges.

His latest adventure involved leading a group of 10 people across Death Valley, cycling through remote places and extreme temperatures.

Participants, who come from different parts of the country, were raising money for a variety of charities including ASOS, Cancer Focus Northern Ireland and MAG International.

The team set off for Nevada in March.

Dean said: “Many had doubts about their ability to complete the challenge and were definitely out of their comfort zones, but they all had a tenacity and drive which allowed them to push themselves to the limit and achieve their goals.

“Starting way out in the depths of Death Valley National Park, the cycle route initially took us even further from civilization, cycling through ghost towns and areas of alien activity with Area 51 very close by.

“The route took us past the desert dunes made famous by the Star Wars films and through Furnace Creek – a small, dusty but welcoming place with a only a few buildings and people. It also holds the record for the hottest temperature ever recorded in Death Valley at 57.1°C.”

After experiencing several days of hard work in extreme heat and freezing temperatures, the group then cycled into the heart of Vegas where they experienced the bright lights of the casinos, supercars and iconic hotels.

Lukbir Chanian, who took part in the challenge to raise money for the ASOS Foundation which is building a care home in India, said: “Just to complete the experience was a fantastic achievement for everyone.

“There were some very difficult days, I believe the team spirit was effective in keeping everyone going and addressing challenges together.”