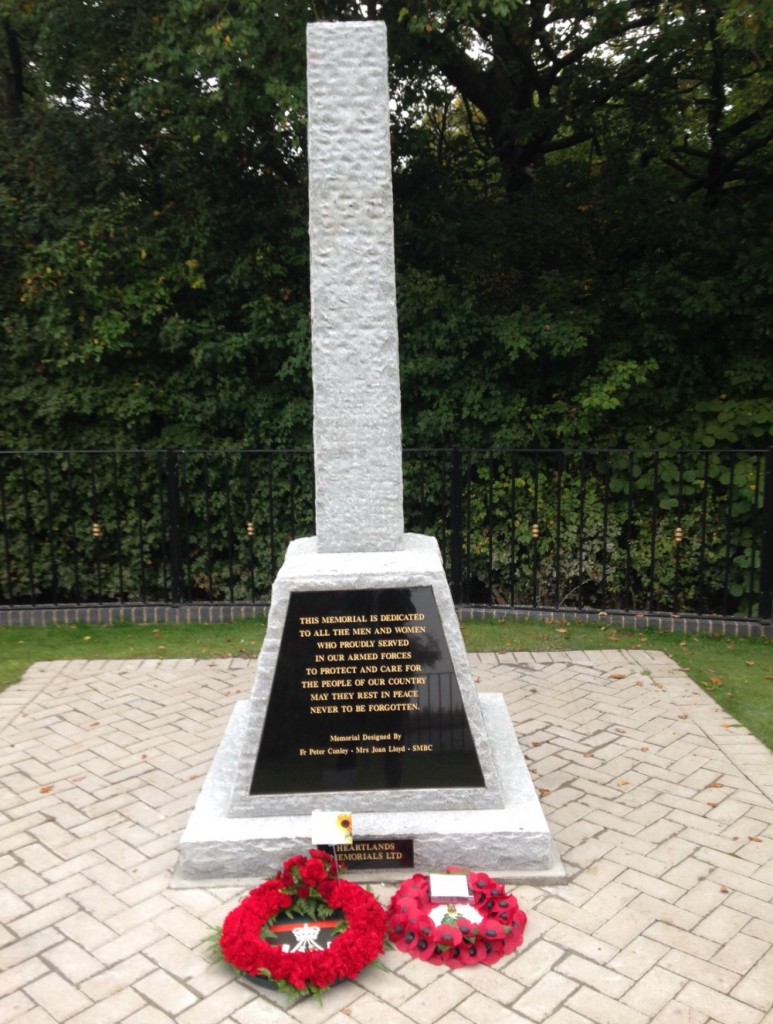 The memorial was built after a fundraising effort by the Friends of Woodlands Cemetery (FoWC) voluntary group, who raised over £13,000 to erect the nine foot granite obelisk.

The obelisk is a memorial to the men and women of the armed forces who served their country and features engravings that represent the different uniformed services – the Army, Navy and Air Force.

The memorial is particularly pertinent given it is the centenary anniversary of the First World War and provides a focal point for friends and relatives to remember those who gave their lives in the conflict.

It also commemorates all those who have served their country in subsequent conflicts.

Friday’s ceremony was attended by the families of two soldiers who passed away in the war in Afghanistan. The relatives of Corporal Robert Christopher Deering, a Marine from Sheldon and rifleman Joe Murphy from Castle Bromwich, helped the Mayor to unveil the memorial in the cemetery where their fallen heroes are buried.

Corporal Deering, 33, died in an explosion caused by an apparent booby trap while on patrol in Helmand Province on December 21 2008.

A light machine gunner in 9 Platoon C Company of 2nd Battalion The Rifles, Joe Murphy was killed in action by an improvised explosive device in Sangin on July 10 2009, aged 18.

The funds have been raised over the past 18 months through a range of activities including balloon releases as well as collecting donations made in the names of lost loved ones.

The FoWC had previously raised £10,000 for the memorial garden and are now looking to raise £4,000 to pay for a set of new gates.

They also received the donation of three granite benches for the garden space, one each from Gascoignes of Coleshill and Franklin & Hawkins, both local funeral directors, as well as one from Peter Costello – a World War Two veteran.

The Mayor said “The memorial is a fitting tribute to all those who served this great nation. I must congratulate the Friends of the Woodlands Cemetery group on the fantastic work that they have done, they’ve raised a tremendous amount of money for an excellent cause.”