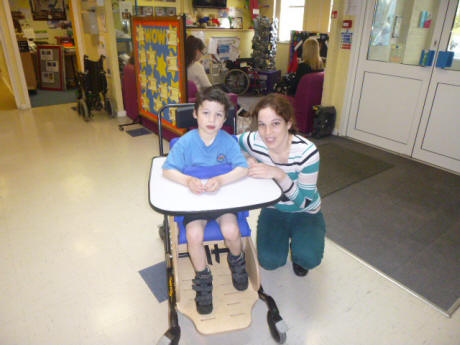 Christopher Shore loves nothing more than to run around the park and watch boats sail by at the water park – but unlike every other six-year-old Christopher, from Solihull, has to have formula milk, walks into things, is unable to vent his frustration and often turns to biting and pinching to express himself.

As autisim awareness month comes to a close Christopher’s mum, Danielle has spoken about her experience of bringing up a child with the condition.

Christopher, a Reynalds Cross School pupil has been diagnosed with many illnesses including dyspraxia, ADHD, food allergies, irritable bowel syndrome as well as autism.

His autism is so severe it has left him unable to speak, a side effect that leaves his mum and grandparents heartbroken – and he still has yet to grasp sign language so can’t release his anger.

Danielle said when Christopher becomes frustrates he bites and pinches as he hasn’t found another way of expressing himself.

“Christopher is one of the happiest children I know,” she said. “He’s always smiling and I know when he has really hurt himself as that’s the only time he cries.

“I’ve had a lot of people come up to who aren’t aware of complex special needs and they have asked me to control Christopher’s behaviour when he’s having a melt-down moment.

“It breaks my heart when people say that – I live each day as it comes with Christopher because I never know what tomorrow may bring it could be a good day but it could be one where he is really poorly.

“Life can be different and difficult at times but it can be rewarding too.

“The pure joy of having a child with special needs is when they reach a mile-stone the feeling is out of this world.”

As well as support and advice from the Kineton Road school Danielle and Christopher go to Coleshill Toy Library, a project funded by Children in Need for children on the autistic spectrum and those with physical and learning disabilities.

At the Toy library Christopher gets the chance to play with other children with complex special ne needs and Danielle can have some respite and talk to other parents who are in a similar situation as she is.

Christopher also gets the opportunity to play with the toys and he can take some home each month thanks to the generous donations made by the public each year.