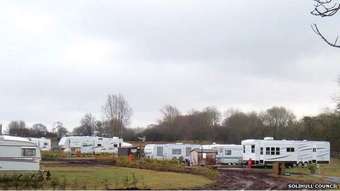 Plans for 31 new travellers’ pitches in Solihull have been approved by council leaders.

The spaces will be delivered at five sites over two phases between 2017 and 2027.

A report to councillors said there are currently seven pitches for travellers in the region.

The approval comes after an independent planning inspector concluded in October the council’s draft plan was suitable, subject to a few changes.

Land at Old Damson Lane, Solihull, which was originally down for 11 pitches, will now receive 13 over both phases.

Six pitches will be created at The Warren, Bickenhill Lane, Marston Green, and four at The Uplands, Dickens Heath Road, Shirley, during phase one.

In phase two, six pitches will be created at The Haven, Catherine-de-Barnes Lane, Bickenhill and two at Canal View in Salter Street, Earlswood.

The report said: “As in most other areas of the country, there is a shortage of authorised Gypsy and traveller sites in Solihull to meet identified need.

“This leads to unauthorised developments and encampments and results in uncertainty for both the settled population and the Gypsy and traveller community.

“It is also well recognised that Gypsies and travellers are amongst the most socially excluded groups in society and research has consistently confirmed the link between the lack of good quality sites and poor health and education outcomes.”