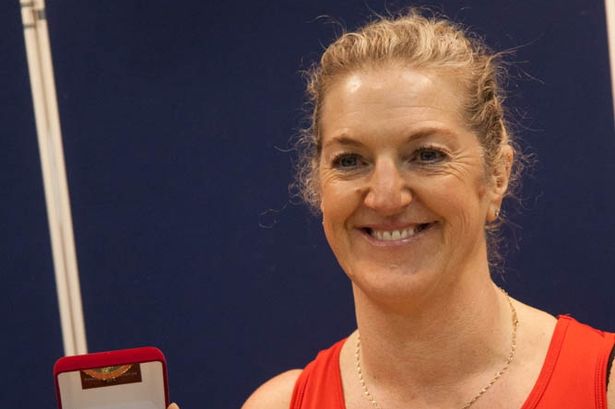 A Solihull woman celebrated her 50th birthday with a world record breaking marathon row in aid of the The Brain Tumour Charity.

Taking part in the charity’s ‘Row for It’ campaign, Ann Atkins achieved the 26-mile distance in just 3 hours, 24 minutes and 21 seconds, placing her at world number one ranking for her age and sex. Completing the row on a static machine at Langley Academy in Olton, where her daughter Iona is a pupil, Ann was joined by members of the school rowing team who took part alongside her in 10 minute intervals for the duration of the marathon.

Ann has been supporting organisations like The Brain Tumour Charity since Iona was diagnosed with a brain tumour in 2007.

“I’ve looked to support organisations such as The Brain Tumour Charity in any way I can,” Ann said.

“I rowed my first marathon in support of the charity last year and I’m thrilled that I’ve been able to beat the current record this time around.

“Sadly the only way that the prognosis and treatment of brain tumours will improve is if more people commit to raising awareness and money to fund the necessary research. I hope that my involvement with the ‘Row for It’ campaign will inspire others to do both.”

The event, which also included a coffee morning, raised around £1,000 for the charity, which campaigns for earlier diagnosis of brain tumours.

Jen Boilestad, community fundraiser at The Brain Tumour Charity’s Solihull office, added: “We’re extremely grateful to Ann for the support she’s shown us over the years. She’s extremely passionate about volunteering so it’s fantastic that she has been able to achieve this record as a result of her work for the charity.”

Inspired by Ann’s efforts, the ‘Row for It’ campaign is officially set to take place in May and asks participants to challenge themselves to row between five and 21 kilometres, completing the distance on either the water or a static machine.