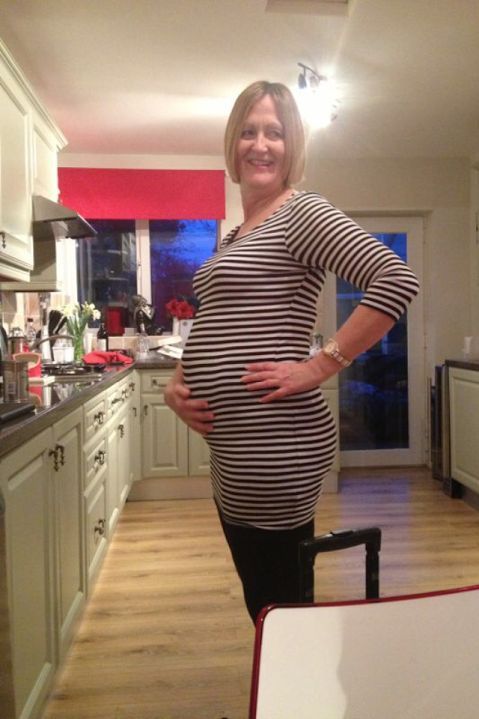 A woman has revealed how she had a rugby ball-sized cyst removed while battling a rare cancer that made her look nine months pregnant.

Lyn Perrett, 53, from Shirley, was originally diagnosed as having irritable bowels when she went to her GP with chronic stomach pains in January last year. When the pain returned and her cyst grew bigger, Lyn underwent a colonic irrigation. The nurse who performed the procedure referred Lyn to Heartlands Hospital where a doctor immediately booked her in for a hysterectomy.

It was only when the emergency surgery was performed in April 2013 that doctors found she had Fallopian tube cancer, a rare condition affecting around one in every 100,000 women.

“I looked nine months pregnant,” said Lyn. “The pain was unbearable. They took out a cyst the size of a rugby ball, and after testing the Fallopian tubes told me I had cancer.”

Lyn remained upbeat and with the support of her 22-year-old daughter Laura, vowed to beat the cancer by undergoing chemotherapy at Heartlands Hospital. The treatment, which finished last September, caused her to lose all of her hair, including her eyebrows. In a bid to stay positive she masked her illness by wearing wigs, floaty clothes and even had eyebrows tattooed onto her skin.

She said: “I never had any funny looks from people in the street because you could not tell I was ill. No-one other than my close friends and family actually knew. I wanted to lead as normal a life as possible because I thought that was the best way to get through it. I also carried on working. When I went to the cancer ward for my blood readings, it was like there were women who actually wanted others to know they were ill. They chose not to wear wigs or do anything to hide the treatment. A nurse told me that they knew who would survive by the attitude of the patients, and I always had a very positive outlook.”

Lyn, who runs a financial services company, had her eyebrow tattoo done by beauty therapist Charlene Pratley at the Elegance Nail and Beauty Salon. The Dorridge practice specialises in treatments for women battling cancer.

“Learning that you are going to lose all your hair can be quite devastating for a woman,” Lyn said. “But as soon as I got diagnosed I visited Charlene to get my eyebrows and eyeliner tattooed. The fact that I still had my eyebrows made me feel better, and more confident to face the world.”

A year on from her hysterectomy, Lyn is in good health and planning her next holiday abroad.