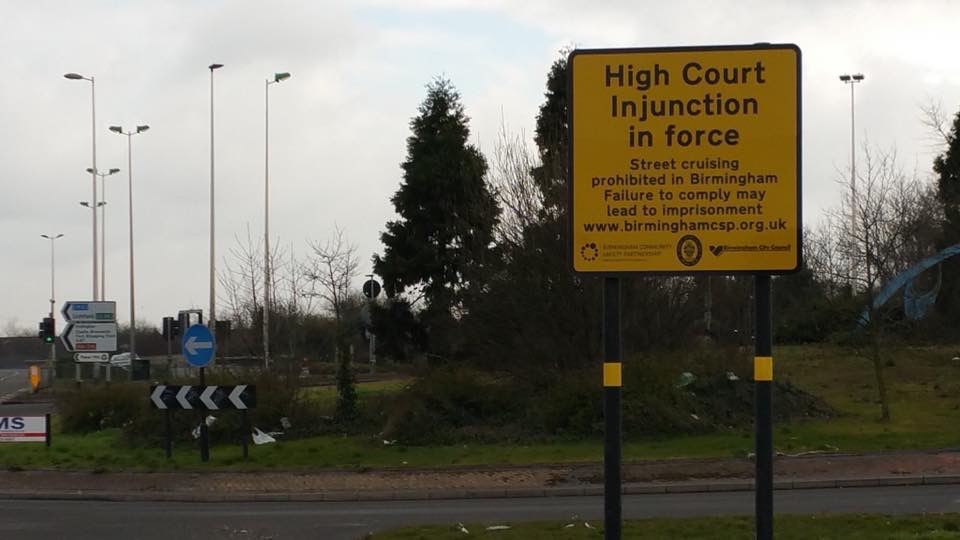 Solihull Council has today been granted an extension for a further three years of its borough-wide ban on motor vehicle racing, covering car- cruises including motor bikes by the High Court in Birmingham.

A SMBC spokesperson said: “The Council was driven to seek these extensive legal powers from the High Court in 2016 following many years of anti-social behaviour and extremely dangerous driving.

“From 2006 to 2016 a number of car-cruise events caused significant problems for local residents, businesses and road users from both motor bikes, and groups of ‘modded’ car owners and spectators in a variety of locations across the borough.

“The Council worked closely with the Police, landowners, residents and businesses to try to stop these types of events taking place or to close them down quickly. However, the powers available to the Council and the Police prior to the 2016 injunction could only deal with individual acts of dangerous driving, anti- social behaviour etc and were therefore difficult to apply to the large groups participating.

“With this extended injunction in place drivers and their passengers participating in car-cruising or racing motor bikes can be arrested and could go to jail. The injunction also includes spectators and anyone else involved in or promoting these activities. The injunction shall now continue in force for a further 3 years until 12 noon 1 September, 2022.”

Councillor Alison Rolf, Solihull Council’s Cabinet Member for Stronger Communities, said: “It is great news to hear we have been successful in the High Court getting our current borough-wide injunction extended for another three years. This injunction has proved to be a deterrent to the blight of car cruising on our streets.

“It has also allowed us to deal with incidents of car-cruising and motor bike issues in a much more straightforward way, as the recent prosecution has demonstrated.

“With the injunction in place, anyone taking part, promoting or watching a car-cruising event or racing or driving motor cycles is essentially in contempt of court.

“We didn’t seek these wide-ranging legal powers without due consideration. But we had to act. This injunction is a powerful deterrent to anyone thinking about setting-up or being involved, in any way, with a car-cruise event.

“Car-cruising is not some harmless pastime, as some of its supposedly ‘responsible’ proponents suggest. The events can blight the lives of residents, cause damage to businesses and usually end up with the Council or landowners having to foot the bill for clearing up the mess spectators leave.

“Solihull said enough is enough in 2016 and we are now saying it again; don’t come to Solihull if you want to stay out of prison. And to motor cyclists and those with quad bikes, to use them responsibly.”

Anyone concerned about car-cruising or anti-social motor bike activities should call the Police on 101 quoting #OperationKickstart Or anonymously via Crimestoppers on 0800 555 111.

There is also an option to provide information via the Safer Solihull website at https://eservices.solihull.gov.uk/SMBCWebForms/?Form=Intel_Public

* The Injunction Order can be viewed on Solihull Council’s website: https://www.solihull.gov.uk/Resident/crimeandemergencies/antisocialbehaviour