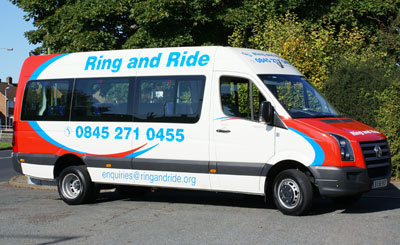 It was feared the door-to-door minibus service might be scrapped due to government cuts. However Centro, which funds Ring and Ride, said it would make £8.5m available next year.

The charity said it was pleased with the money but would not be able to continue Sunday services under the new funding arrangement. Operating hours will be reduced, with buses running from 8.00am to 8.00pm Monday to Saturday. Fares will also rise from 60p to £1.

Centro said it had cut staffing costs to protect front-line services. Its members voted to keep half-price bus fares for children and free tram and train travel for eligible people, despite previously warning they could also be cut.

Peter Maggs, chief executive of West Midlands Special Needs Transport (WMSNT), said it was pleased with an £8.5m grant for 2014/15 but he said the group, which runs West Midlands Ring and Ride, faced uncertainty in the future. He said: “We are not going to be able to provide the same level of service we have up until now.”

Campaign group West Midlands Pensioners’ Convention submitted a petition with more than 70,000 signatures to Centro opposing proposals to drop Ring and Ride. Chairman Tom Gray said the group deplored any cuts but felt Centro had listened to its concerns. However, he warned the group would campaign against any further cuts or fare increases in future budgets. He said: “Any small increase in contributions is going to have a severe impact on people when you are expected to live on the basic state pension.”

One pensioner who uses Ring and Ride said it provided a very important service and a key means to get ‘out of the house’. Another Tom Richards, 86, said it was a lifeline.

Centro is responsible for bus, rail and Midland Metro tram transport in the West Midlands.