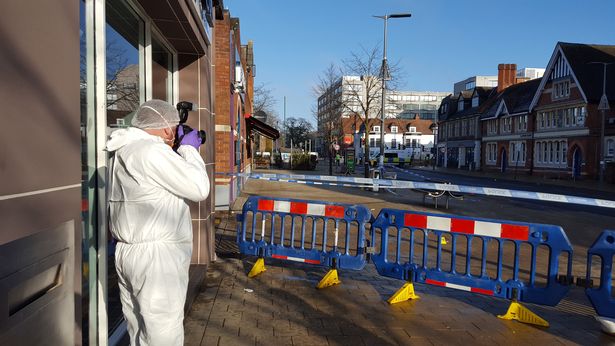 A teenager was seriously injured after being stabbed in Solihull town centre – just hours after 21-year-old Jack Donoghue was murdered nearby on Poplar Road.

The latest incident followed reports of a teen gang ‘with knives and machetes’ in Touchwood shopping centre on Friday evening.

BirminghamLive has revealed that a 15-year-old boy was taken to hospital after being attacked on Sunday afternoon, barely 40 hours after Jack’s murder in the vicinity.

One homeless man BirminghamLive spoke to in the town centre said he had seen someone on Sunday running with ‘a machete’.

Having also seen the emergency services in action when Jack was killed at 3am on Sunday morning he said: “I just thought to myself… oh, no… surely we’re not going to have a second murder in two days?”

The man told BirminghamLive on Monday morning that the patient had been taken away in an ambulance.

The man added: “Things like this happening more frequently, yet some people are more concerned with trying to get the homeless off the streets than dealing with those carrying knives.”

The incident was the third in successive days in the borough – where the motto ‘Urbs in Rure’ means ‘Town in the Country’.

On Friday night, a gang of teenagers were seen in Touchwood shopping centre ‘armed with knives and machetes’.

Hours later, at 3am on Saturday morning, 21-year-old Jack Donoghue was murdered on Poplar Road.

A West Midlands Ambulance Service spokesman this evening confirmed it had attended a stabbing on Sunday close to the scene where Jack Donoghue was murdered in the early hours of Saturday.

In a statement, it said: “We were called to reports of a stabbing at the junction of Warwick Road and Poplar Road at 5.20pm on Sunday.

“One ambulance was sent to the scene. On arrival we discovered one patient, who was treated for a serious injury before being taken to hospital for further assessment.”

A West Midlands Police spokesman said: “Police were called after a 15-year-old boy was found with a stab injury in Warwick Road, Solihull, at around 5pm yesterday. (Sunday 1 December).

“He was taken to hospital with a chest wound which was not life-threatening.”

Anyone with information can contact police via Live Chat at west-midlands.police.uk, or via 101. Quote crime reference number 20SH/284034T/19.