Tourist who had a heart attack thanks airport police 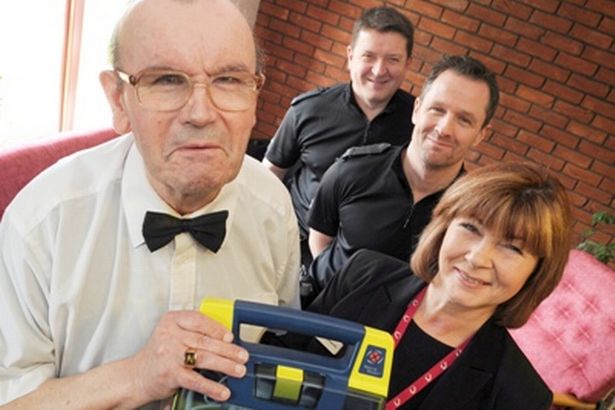 A holidaymaker who suffered a heart attack as he flew home to the Midlands has been reunited with the Birmingham Airport police officers who helped save his life.

David Jackson collapsed as he waited for his luggage after arriving on a flight from Majorca last October. Officers from the airport policing unit raced to help but found him not breathing and without a pulse. They used a defibrillator to deliver an electric shock to David’s heart and he quickly began breathing unaided again.

David, from Penkridge, near Stafford, thanked the officers in person when they visited the Riverside House sheltered housing complex, where he lives, just days before his 70th birthday.

“I would not be alive today if it wasn’t for them,” he said. “I don’t remember anything until I was in the hospital but I know they stayed with me until the paramedics arrived. I really appreciate what they did for me. I had sent the officers a picture of me just to remind them of whose life they saved, but we thought it would be even better to thank them in person.”

Inspector Keith Wiseman praised airport officers PCs David O’Neill, Kevin Cartwright and Paul Ingram for their actions. He said: “It was fantastic that David was able to show his gratitude to the officers involved in saving his life. This is also a powerful example of just how good the piece of equipment used is and will hopefully encourage more people to be aware that they exist in key locations.”

Debbie Brownlie, from Riverside House, said: “David’s family and I wanted to convey our thanks and gratitude for the officers’ help. I know well the split decisions you face when confronted with a life-or-death situation. I am truly grateful they were able to put their training to very good use.”