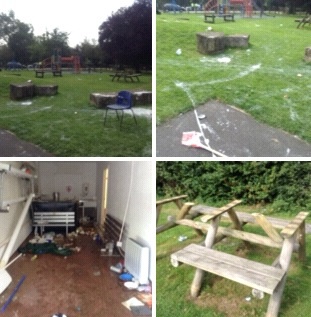 Police and Council officials have removed Travellers from Chadwick End playing field this afternoon – but look at the damage and mess they have left behind!

Seventeen caravans arrived on Sunday (7th) and a further ten last night, they set up camp near to the children’s playground and also gained entry to the football pavilion.

We were told by someone who lives locally: “It is a complete mess and they have been using the public footpath that runs alongside the playing field as their toilet facility.”

Police have been patrolling the area each evening and a local resident told us they really appreciated the support of the Police and Council – and felt safe knowing Police were on patrol in the neighbourhood.

A local lady, Victoria Lowe, sent us these pictures and said: “I live in Chadwick End and my house backs onto the playing field where they set up. I have photos of the damage they have done. Look at them. It’s terrible they are nasty people.”

Another local resident said: “The police are treating it as a crime scene that don’t really want people over there. Apparently Solihull Council will begin the clear up tomorrow.”

People are now saying the same Travellers have set up camp in Tudor Grange Park – this has not been confirmed.