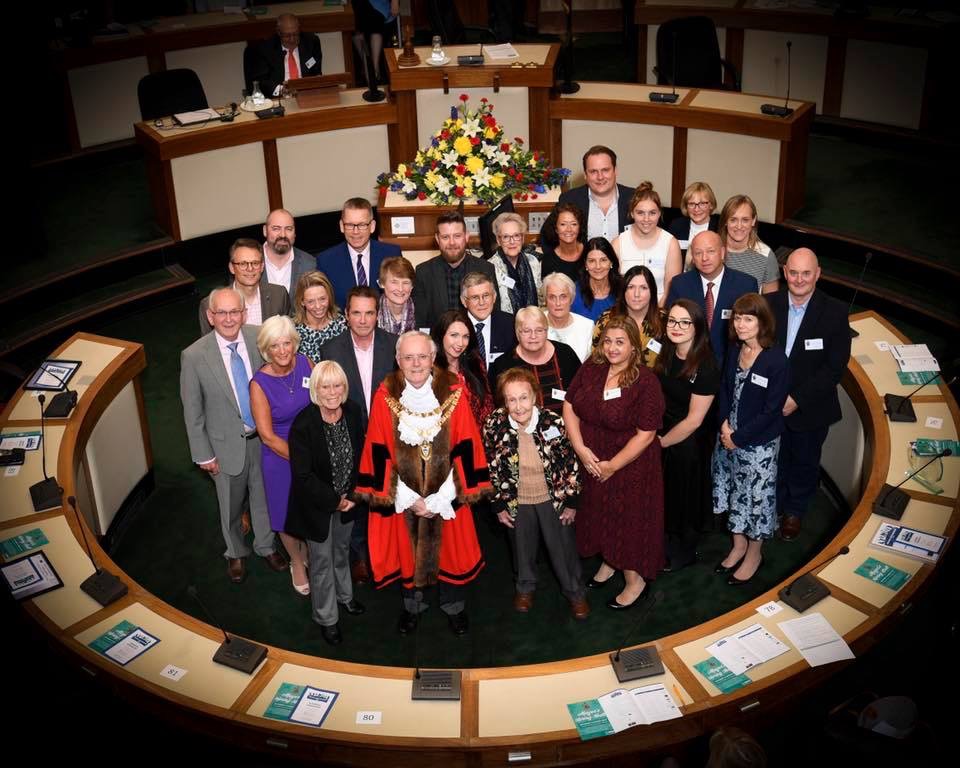 On Monday 14 October, unsung heroes throughout the Solihull borough were recognised at the ninth annual Solihull Civic Honours Awards ceremony.

The winners were invited to receive their awards from the Mayor of Solihull, Councillor Stuart Davis, at Solihull Council’s Civic Suite. The winners also got to meet representatives from their award’s sponsor and also listened to a performance by Shirley Community Gospel Choir.

Over recent months, residents were invited to nominate people who have helped to make the communities within Solihull better places to live. The judging panel, which contained a mixture of councillors, officers, representation from community groups and the main sponsor, Touchwood, were then left with the difficult job of selecting this year’s winner from the extensive list of deserving nominees.

The Mayor said: “This event is truly one of the highlights of my mayoral year. I am privileged to represent a borough that contains such marvellous people as those that have won an award tonight. I want to thank them for their devotion and enthusiasm that in turn makes Solihull such a wonderful place to live.”

The winners in full:

Dr Carol Wood is the epitome of an unsung hero having dedicated over 15 years to the Solihull based charity, ReCOM. It is Carol’s drive and community spirit that has allowed ReCOM to grow and benefit thousands of Solihull residents. What many people do not realise is that Carol has done this selflessly; as Chair of the charity she works on an entirely voluntary basis. Since leaving corporate life, Carol has dedicated full working days, several days a week as the strategic and operational lead, raising much needed funds for the charity’s work and developing its services to meet the needs of local people.

Initially, the charity’s focus was to recycle computers from corporations and provide these to community groups and individuals on a low income. However, the need for IT training soon became apparent and Carol was quick to listen and adapt services to meet this need. From there, ReCOM has been central to bridging the digital divide in Solihull. Every year ReCOM makes a difference to the lives of those facing disadvantage; helping them gain the skills to get online. This lets them reap the benefits the internet offers, reducing social isolation, increasing employment prospects, accessing services, keeping in touch with friends and family, saving money and much more.

Derek is an active citizen in Kingshurst. He runs several Facebook pages and groups, including Friends of Babbs Mill and I Grew up in Kingshurst, which inspire and share his love of Kingshurst.

On top of this, he organises and leads regular clean up events within his beloved Babbs Mill Local Nature Reserve, with the help of LoveSolihull and numerous other local Community Groups. Derek works tirelessly to keep the Nature Reserve in Babbs Mill clean and tidy. He not only litter picks every time he walks the area, he also organises groups to litter pick. He is a key community leader launching and loves his community.

Lesley Lamb has been a volunteer at Bosworth Community Centre in Chelmsley Wood for well over 10 years. She gives an enormous amount of her free time to the Centre coming in on Christmas Day to cook a full Christmas dinner for all the local community members that do not have anywhere to go on that day. Lesley also leads in the hamper collections and donations and personally distributes them around during the festive season.

In addition, all year round Lesley heads a lunch club every Thursday in which there is a two-course meal cooked to help the isolation and loneliness in the area. This is a very popular and worthwhile project, which is all prepared and cooked by Lesley. Lesley never asks for anything in return and would be willing to help out in any way she can. She is a true local hero who is dedicated to her community and helps to change lives.

Paul Raymer has lived in Marston Green for over 50 years. He is a Lay Preacher at St Leonards and this year is his 40th Anniversary in service. There are many groups and organisations within Marston Green and residents have often said that Paul is a good link between themselves and those organisations.

As well as many other commitments, Paul is also the Editor of Talking Times which is a monthly Marston Green Community News sheet. He collects information and is responsible for the setting up, printing and distribution. Talking Times is a great boon to anyone who is not online. It helps to have this easy access to what`s going on and encourages participation thus reducing loneliness. He is a warm, sincere person, generous, always willing to help and very much community minded.

Annette Hulme, Stacey Lintern and Danielle Collinson began Solihull Mums and Dads as a place to share parenting advice within their friendship groups. Over time they became aware of how many parents in the local area were struggling without support networks, so they decided to make the Facebook page public so that other parents going could access support and begin to forge friendships like their own. Their group now contains 13,000 members.

It’s hard to convey how much of a difference these women have made to the lives of parents in Solihull. They have provided a place for parents to ask advice, to gain support, and to make friends. They receive no compensation for the time they spend helping the community. They have done so much for the Solihull Community and helped so many people at very difficult times in their lives.

Amongst many other initiatives, Age UK Solihull runs the Community Advice Hubs at The Core and Chelmsley Wood, providing a range of advice to Solihull residents of any age. 19 Welcome Desk Volunteers greeted over 3000 Hub visitors last year, also helping with administration and directing people to advisers. Each volunteer plays a vital role in the work of the charity and everyone is driven by the aim of helping local residents in Solihull.

The volunteers who formed the Knowle, Dorridge and Bentley Heath (KDBH) Neighbourhood Forum in 2015 set out on the gargantuan task of creating a Neighbourhood Plan for KDBH. A task they completed earlier this year.

The result has been the adoption of a 93 page statutory planning policy documentation for KDBH, which the local community approved the 5,056 votes for to 207 against. The plan sets out as policy those principles for land use, development and infrastructure which the community has prioritised. The benefit for the community, residents and businesses, will be the protection of the area for unsuitable development and the sustaining of village centres, open spaces, residential areas and community service infrastructure through future years of growth, in accordance with local people’s collective vision.

Isabel is the administrator for the choirs of St Alphege Church in Solihull. However, to call her an administrator seriously under plays the contribution that she makes to the choirs. It would probably be better to refer to her as everyone’s “Choir Mum”. She organises all aspects of choir-life, encourages the children and does massive amounts of work behind the scenes to make the choirs a success. She never misses any rehearsals or services and is often at church well in advance of these appointments to organise and motivate participants.

Freya is 17 and a carer for her father who has Arthritis. She has been actively caring since she was six-years-old and has supported her dad physically and emotionally throughout this time. When she isn’t studying for her A-levels, or participating in sporting activities, she helps her dad when her mum has to work; she spends 50 hours a week caring and she has a paper round to help support her family financially.

Freya has been registered with young carers since 2016 and has fully engaged with the support services available to assist her in managing her caring role, accessing respite time through groups and activities. Even with a physically and emotionally demanding caring role, Freya finds time to help other young carers. She has supported three young carers individually and has facilitated several group sessions. Freya progressed to become a Young Leader and has achieved a gold award in recognition of 100 hours of volunteering in a year. For the last year she has also spent 2.5hrs a week coaching children in long jump at a local athletics club. Freya is remarkable in her resilience and her selfless ability to encourage others like her.

Corinne James has been a long standing and well-respected member of the governing body of Marston Green Junior School for well over 30 years. Throughout this time, Corrine has shown her unfailing and full commitment to the pupils, families and staff of the school. She has marshalled on through a difficult and challenging period of ‘Special measures’ and has remained a steadfast supporter until the school was awarded ‘Outstanding’ in 2012. She has been instrumental in relentlessly and diligently steering Marston Green Junior School in the right direction with her no-nonsense approach, cautionary advice and reassuring words of kindness and encouragement.

For the past six years, Sarah Adams has been the Event Manager and main organiser of the annual Solihull Marie Curie Cycle rides. These rides have raised an enormous amount for the Hospice, as well as promoting cycling in Solihull. The event is huge and Sarah spends a lot of her time working with all the sponsors, partners and volunteers as well as the participants, who raise additional funds and donate so generously on the day.

Sarah has also personally set up and now runs the women’s cycling group Red Kite Belles. This promotes cycling for women by organising two weekly cycle rides for beginners. The Belles are a welcoming and inclusive group who offer support and encouragement to women riders of all abilities, including those new to the sport.