White Christmas is guaranteed in Solihull this year 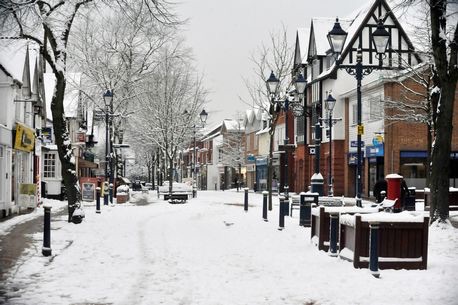 There’s one place in England that is guaranteed a white Christmas – it WILL snow in Solihull!

That’s because local businesses have forked out to provide snowmakers, which will billow out ‘snow’ on the high street.

The evening will also include an LED drumming display, parade and Santa.

The machines will be a daily fixture – located next to the grotto.

They have been funded through a sponsorship package by holiday firm Thomson.

Solihull BID’s Melanie Palmer said: “Solihull will be the ultimate Christmas destination in the Midlands.

“We are creating a winter wonderland feel for families and it will be magical to see children’s faces as they see the snow falling around them.

Maybe they’ll throw a snowball or two with their friends in the snow garden play area.”

There will be roaming entertainers in the town centre on every Saturday in December in the run-up to the big day.

Touchwood shopping centre will be the setting for an Ice Bar serving frosty cocktails.

And one of the highlights of the seasonal programme is the Christmas Market, featuring 60 stalls, which opens on Saturday 29th November.

Nationally, the last proper white Christmas – where the ground is dusted, rather than the odd flake recorded – took place in 2010. There have, however, been snowflakes 38 times in the last 52 years.

But the chances of real snow this 25th December are slim, say weather experts.

A spokesman for the Met Office said: “For most parts of the United Kingdom, Christmas is right at the beginning of the period when it’s likely to snow. Looking at climate history, wintry weather is more likely between January and March than December. Snow or sleet falls on average five days in December, compared to 7.6 days in January, 6.8 days in February and six days in March.”

PLEASE NOTE: It has been confirmed by Solihull BID, the ‘snow’ WILL be flowing during the Christmas Lights switch-on on Saturday (22nd) and then ONLY near to Santa’s Grotto from 29th November, which will be located outside H-Samuel on the High Street.