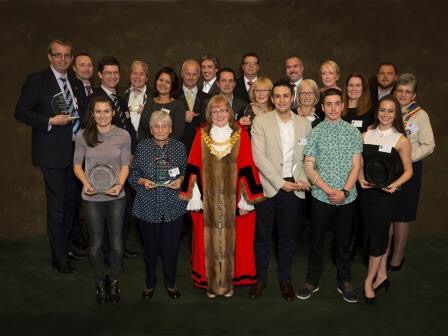 Those selected were invited to receive their awards from the Mayor of Solihull, Councillor Glenis Slater, and to meet representatives from local businesses and organisations.

Residents of the borough had been invited to nominate their unsung heroes who had helped to make the community a better place.

The judging panel of officers, councillors and representatives from community groups and sponsors were then left with the tough task of reviewing the long list of nominees and selecting this year’s winners.

The ceremony also featured a performance by the Solihull Music Service’s Soul Matters.

The Mayor said: “It has been a lovely evening and is becoming one of the best events in the Solihull Civic calendar.

“I was delighted to meet the residents of the borough who are so deserving of recognition for the great work they do.

“It makes me very proud to represent the area, knowing that we have so many people who contribute to making such a strong community.”

“Karen has twice been named FA Young Player of the Year. She first played for Birmingham City Ladies in 2001 and England in 2005. In March this year, she became the first female player to be inducted into Birmingham City`s Hall of Fame after becoming the youngest England international of either sex to earn 100 caps. She has brought international honour to Solihull in the form of her World Cup Bronze Medal and the town is proud to honour her achievement. ”

“For the last 28 years June has run the Friday coffee mornings at Knowle Village Hall. She wanted to help people who were on their own, lonely and provide a place where they could meet, have tea and cake, chat and make friends. She is dedicated to providing the service, welcomes people with open arms and has time for everyone. June is a true community champion.”

“Pat has served at Chelmsley Wood Baptist Church (now Three Trees) for over 30 years. She has been involved in all aspects of community life, from working in the Kids` Clubs to running the lunch clubs and community events. Pat is a shining example of a selfless volunteer, always with the community`s interests at heart and supporting the local Baptist Church in its work.”

“Both Kathryn and Jan bring creative arts to the elderly residents of Solihull. This work began when Jan started  the Rayner House Art class in 1987. She subsequently involved fellow member of Solihull Artists Forum, Kathryn Pettitt. They engage the residents of six Solihull residential care homes and two local day care centres in the creative arts.

“Solihull Round Table has been a crucial part of the local community for 65 years and has raised £500,000 supporting projects. These include a minibus for Reynalds Cross school, buying incubators for sick children, keyhole surgery equipment for Solihull Hospital and many more. All work is done voluntary and this organisation makes an outstanding contribution to the local community.”

“Andrew has been a member of Olton Mere Sailing Club for many years and turned his passion for sailing into an asset that benefits not only Olton Mere but many schools, clubs and societies throughout Solihull. He opened up the club as a Sailability Centre, providing sailing coaching for people with disabilities, including Reynalds Cross School.”

MAKING A DIFFERENCE FOR YOUNG PEOPLE (Sponsored by the NEC): Sheila Cole

“Sheila makes a huge impact to 1st Solihull Scout Group and has given more than 30 years service to Beavers in Solihull, mentoring over 300 youngsters in that time. Sheila also co-ordinates much of the fundraising initiatives including a large annual bonfire and fireworks display, supermarket bag packing and textiles recycling.”

“After being hit by a car in March 2012 Charlie sustained severe brain injuries. He was in a coma for 4 months and then had to be transferred to a Neuro rehab unit in Surrey for 6 months. He passed his FA level 1 Coaching badge and referring course and now manages the Solihull Moors disability side and refs the Blues Academy side. This year, Charlie represented Northern Ireland at the Cerebral Palsy World Cup.”

“With partner Lloyd Perry, Rebecca won the junior Ballroom and Latin categories of the British National Championships in 2009 and 2013. In 2015 they have achieved two wins and seven second place finishes in 14 Latin competitions entered. In 2014 She was listed as one of 33 pupils at Arden to secure at least 10 A* or A grades at GCSE. For combining national and international competitive success, academic achievement and personal drive and dedication to practice, Rebecca is an outstanding example to other young people.”