Work begins on A45 bridge project 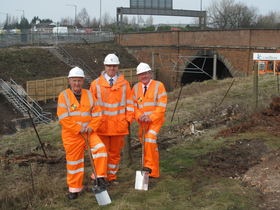 Work is beginning on Solihull Council’s South Bridge Replacement project on the A45 in Bickenhill.

On Thursday 12th March, Leader of the Council, Councillor Bob Sleigh, and Cabinet Member for Transport and Highways,Ted Richards, were on hand to put the first ‘spades in the ground’ on this major project to improve the infrastructure of Solihull’s roads.

This area is one of the busiest parts of the West Midlands’ road network – with high levels of traffic travelling to and from major economic assets including the Airport, National Exhibition Centre and Jaguar Land Rover.

These assets are all creating growth in the borough and supporting the local economy.

Solihull Council and the Highways Agency have joint short term, medium term and long term plans to address this growth ahead of the development of UK Central.

In the short term, there are a number of highway improvement works which have been carried out or are being undertaken. The Highways Agency has created extra capacity at M42 Junction 6 as part of their pinch-point programme. The Airport has widened the A45 westbound between the M42 Junction and the Airport exit road.

The replacement of the bridge is a slightly longer term project, with an expected completion date of Autumn 2016. It will see the replacement of the A45 South Bridge, a 160 year-old structure over the West Coast Main line which is used by over 30,000 vehicles a day. It is no longer suitable for traffic in its existing form with weakening parapets and substandard waterproofing.

The new bridge will be constructed alongside the existing bridge to allow for the route to remain open throughout the scheme. Demolition of the old bridge structure will take place over a 54-hour possession of the rail line during Christmas 2015.

Since January, vegetation clearance and site set up including installation of access routes to the worksite has been undertaken. Some accommodation work for utilities diversions has been carried out, namely to divert Severn Trent Water mains and BT cables into appropriate locations before construction of the new bridge can begin.

Now work has begun on excavating the cuttings on either side of the bridge so that construction machinery can access the immediate vicinity of the bridge to install the abutments of the new structure.

Councillor Bob Sleigh, Leader of Solihull Council said: “The importance of this project for the regional and strategic highway network really cannot be underestimated. The new bridge will ensure continuous accessibility to one of the UK’s most economically important locations. But it is also crucial in ensuring we can provide safe and reliable journeys for our road users.”