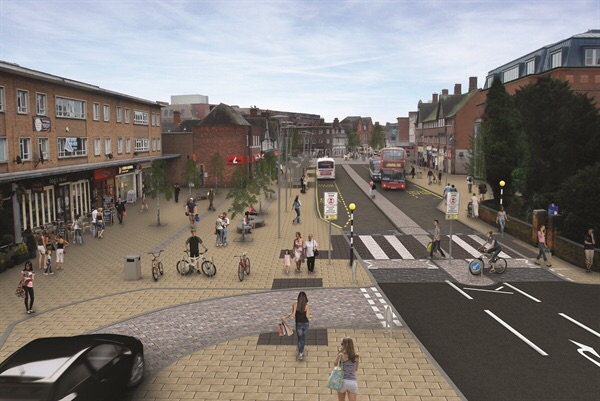 The main works for the Solihull Gateway project begins today (2nd March) with an expected completion date in October 2015.

The Solihull Gateway project will see in the region of £2.3m of highway improvements in the Station Road and Poplar Road area of Solihull town centre.

A temporary one-way traffic flow system is being introduced for the duration of the work from today (2nd March) through to October 2015.

The one-way system will affect most of Station Road and a section of Poplar Road.

All traffic, including buses, will pass through the area in an easterly direction (towards the town centre) along Station Road towards Poplar Road.

The one way system will start after the service road access (next to Jimmy Spices) immediately after the roundabout junction at Lode Lane/Streetsbrook Road junction.

Two-way traffic will be maintained:

* Along Poplar Road from its junction with Warwick Road to the entrance of Marks & Spencer’s car park.

The works will be carried out in stages. As the works progress bus stop positions will need to change. Four stages/changes are anticipated.

Information is available at: www.networkwestmidlands.com/gateway.

Pedestrian walkways will be maintained throughout the works to give access to shops, businesses and bus stops. There will be diversions for pedestrians around areas of works and safe crossing points will be provided.

During the works taxi ranks will be provided for hackney carriages/black cabs.

A new rank is also being introduced in Mill Lane, outside Marks & Spencer’s. This rank will be in place prior to the works starting.