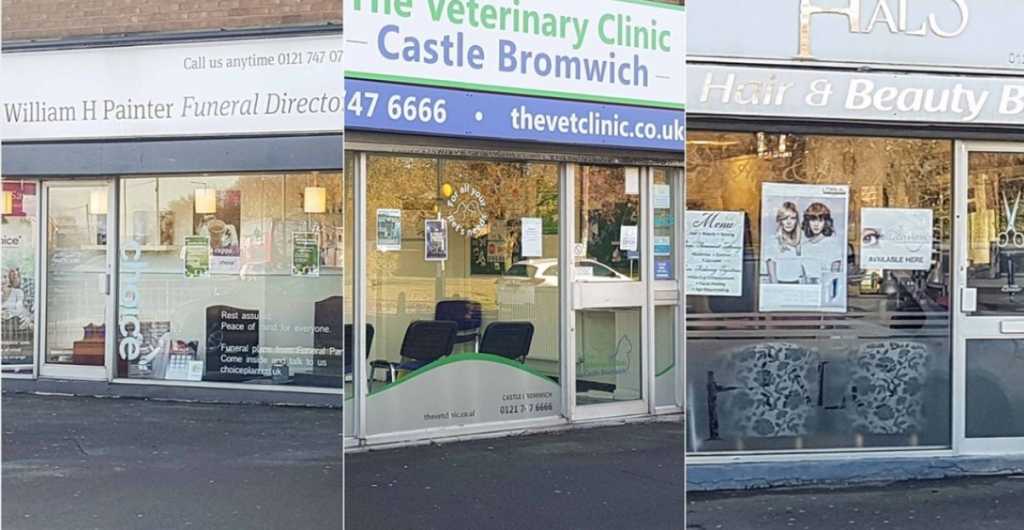 Shopkeepers on Green Lane in Castle Bromwich are being forced to lock their doors during opening hours – amid fears crime is worsening in their area.

A funeral directors, hairdressers and a veterinary clinic revealed how they stay locked-up until a customer arrives for their own safety.

News of the closed-door policy emerges just a week on from a devastating stabbing which sent shockwaves through the ‘tight-knit community’.

The victim, a man in his 30s, was brutally stabbed outside Gregory’s Fish Bar at 7.40pm on Monday 11 November.

Quick-thinking shop workers rushed to his aid, bringing out towels to help stop the bleeding before the ambulance and police arrived on scene.

He suffered a total of 11 knife wounds – which required seven hours of reconstructive surgery, a close relative told BirminghamLive.

A 22-year-old man was arrested days later on Thursday 14 November, but was bailed pending investigation as the victim faces a long road to recovery.

“Evil world we live in, frightened to go out,” one said in response to the news, while another wrote: “How disgusting, can’t go out anywhere.”

And some business owners within the shopping area don’t even feel safe enough to keep the doors open to customers – and instead lock up during opening hours.

The owner of William H Painter Funeral Directors, who did not wish to be named, told how she recently started locking the door after she was attacked in the doorway.

Speaking on her way to work, just across the road from the chippy, she said: “This area is getting worse you know.

“I was attacked in my shop in November last year. A man came up to me and said to me ‘I don’t like the way you’re talking to me’. I said: ‘I haven’t spoken to you’ as I was just opening my shop up.

“He just punched me straight through the door and I landed in the doorway.

“This is why I get so scared around here – because of all this. I lock my door now, it’s really come to something when a funeral directors has to lock their door.”

She also spoke of shoplifters regularly stealing from the nearby Tesco and the fatal shooting of Leneto Kellengbeck in March – which took place in nearby Arran Way, Smiths Wood.

But the funeral directors isn’t the only premises which hopes to shut out potential thugs or burglars with its closed-door policy.

The Veterinary Clinic at 128 Green Lane, which has been open about 21 years, keeps its doors permanently locked until its bell rings.

“For the last 15 years, that’s been the way we work here – our door is always locked. People have to ring the bell to gain admittance,” explained manager Fay Lewis.

“It’s permanently locked, we have an internal system so that when the bell rings, a member of staff will look to see who’s at the front door and let them in.

“It does [help us feel safer] but obviously we can get people that we don’t know, you never know who you’re letting into the premises.”

The move to lock up during opening hours came after incidents in the waiting room.

She said: “We had a couple of occasions where members of the public, not necessarily clients, were coming in and stealing from the waiting room.”

Crime does appear to be rising in the area, she agreed, with a large number of violent crimes reported on social media.

“I’m a member of the Castle Bromwich Facebook group, and from what I can see, there’s a lot of physical crimes being reported.”

A spokeswoman for Halo Hair & Beauty also said it is ‘policy’ to keep the door locked until a customer arrives for safety reasons.

When asked if Saydon Pharmacy keep its door locked, a staff member said: “We’d be at the front door every two seconds! The crime is the same everywhere to be honest.

“Because we’re a chemist we do get prone to certain things but no more than anywhere else to be fair. Years and years ago we had a ram raid, but that was many years ago.

“We’re on the ball here, we do have a system in place, if we’re aware let’s say that there’s dodgy people outside the shop. We have our own little systems in place.”